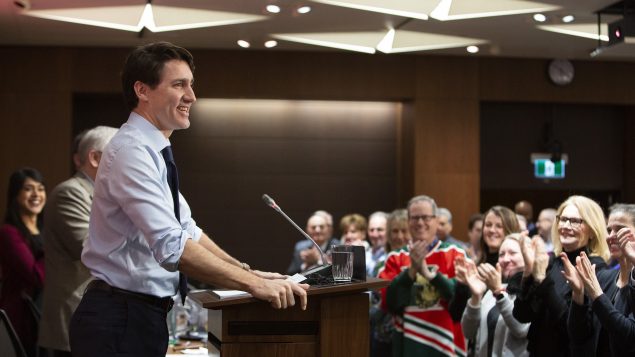 Trudeau urges Liberals to campaign on ‘hopeful’ vision of Canada

With the world increasingly in turmoil – politically, economically and environmentally – Canada needs to remain an oasis of hope, Prime Minister Justin Trudeau said Sunday at the opening of a two-day caucus retreat for Liberal MPs on Parliament Hill.

“People across the country — and really, around the world — are anxious about what they see happening on the news, and in their communities,” Trudeau told his Liberal troops.

Advances in automation and artificial intelligence are threatening once stable jobs, he said.

Climate change is an increasingly dire threat, with floods and fires “destroying whole towns at a blistering pace.”

“The world’s two largest economies are at odds, and our founding European nations are going through unprecedented political turmoil,” Trudeau said, referring to the ongoing trade war between China and the U.S., and political crisis in Britain over Brexit, as well as “yellow vest” protests in France.

“But we have to stay focused. We owe it to Canadians.”

He took the opportunity to tout the Liberal record, and slam the Conservatives at the same time.

“Our unemployment rate is the lowest it’s been in over 40 years, giving people the chance to get out of poverty and start building a new life for themselves,” Trudeau said to applause from party faithful.

“Make no mistake: The Conservatives pretend to be ‘for the people,’ but that couldn’t be further from the truth. This is still very much the party of Stephen Harper,” Trudeau said, referring to his Conservative predecessor.

Trudeau used Sunday’s speech to sharpen what will be his core campaign message when Canadians are expected to go the polls in October in the next federal election.

The Liberals will run on the “hopeful vision of Canada once again,” he said.

Trudeau took several partisan shots at the Conservatives, saying they have no plan for tackling climate change and the economy while citing Liberal gains in lowering taxes and unemployment.

Throughout his eight-minute speech Trudeau never mentioned the left-of-centre New Democratic Party, hinting that the Liberals are gearing up for a two-way race with Andrew Scheer’s Conservatives and do not consider the NDP and its new leader Jagmeet Singh to be a serious threat.