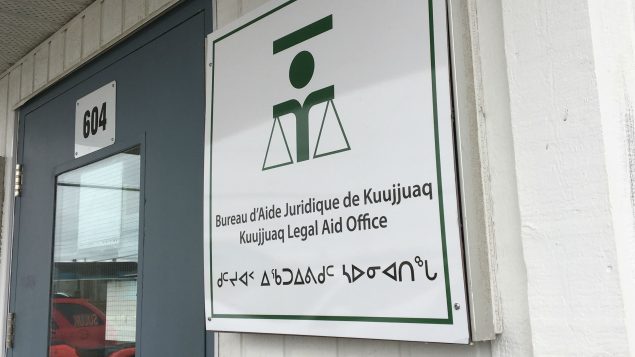 The Legal Aid office in Kuujjuaq, Quebec. Recruitment challenges are forcing the office to be relocated 1300 kilometres away to the city of Val-d’Or in southern Quebec. (Eilís Quinn/Eye on the Arctic)

The legal aide office in Kuujjuaq, the administrative capital of the Inuit region of Nunavik, Quebec, will be temporarily shut down in March after an inability to recruit staff for vacant positions.

Nunavik’s sole Kuujjuaq-based legal aid lawyer, Valérie Bergeron-Boutin, will be leaving her position on March 15 and a replacement still hasn’t been found.

The legal aide office has also been searching for months to fill the vacant post of secretary, but hasn’t found anyone willing to relocate to Kuujjuaq, the Community Legal Centre of Abitibi-Témiscamingue told Eye on the Arctic on Thursday.

The region of Abitibi-Témiscamingue is located in southwestern Quebec but the legal bodies there are also responsible for Nunavik.

“Recruitment is such an issue,”  Nathalie Samson, the director general of the Centre told Eye on the Arctic in a phone interview on Thursday. “We just don’t have the applicants that want to relocate.”

Office moving over a thousand kilometres away

Samson said the Centre is committed to re-opening the Kuujjuaq office when they’re able, but in the meantime, the Nunavik legal-aide position will be temporarily transferred to the community of Val-d’Or, some 1300km southwest of Kuujjuaq, as of March 18.

Makivik Corporation, the organization that represents he political interests of Nunavik Inuit, and the Kativik Regional Government, the body that administrates Nunavik, did not respond to requests for comment before deadline on how the legal aide closure might affect clients in Nunavik.

There are no resident judges in Nunavik, a region with a population of around 13,000 people.

The region’s 14 communities are served by an itinerant court from southern Quebec that visits communities an average of two to four times a year depending on the weather.