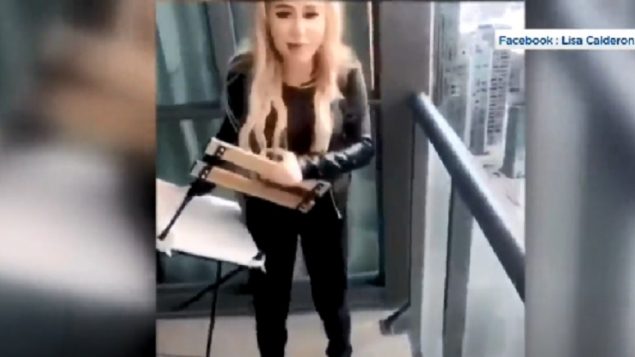 A video posted online appears to show a young woman throwing a chair from a Toronto highrise onto the street far below last weekend. She has since been identified and charged (Lisa Calderon-Facebook-via CBC)

An online video apparently showing a young woman throwing a chair from a Toronto highrise is eliciting shock and outrage from Torontonians, and people right across the country.

The building is right beside a very busy Toronto highway and busy street below.

Although no injuries are reported, it is seen as an extremely dangerous and potentially deadly act, said to have occurred Saturday morning from somewhere in the building 20 to 30 stories above the street. 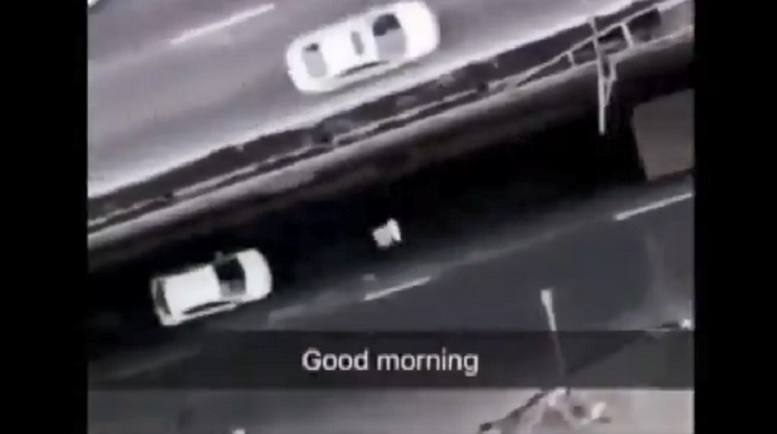 The chair can be seen falling many stories below as the white spot in front of the white car. Apparently it landed on the street pedestrian sidewalk seen in the lower right corner (Lisa Calderon-Facebook-via CBC)

Later photos show that apparently two of the patio-style chairs were thrown, as well as other items, all seeming to have landed on the sidewalk of the street in front of the building.

Police and building management are investigating and asking for help in identifying the young woman.

This is not funny, I hope she gets caught!🤬 #Toronto

At least one long-term resident of the building speaking to CBC TV news speculated that the individuals may be short-term rentals from a supplier such as AirBNB as she has seen many people in the building in recent times that she didn’t recognise.

Police say the woman could be charged with mischief endangering life.