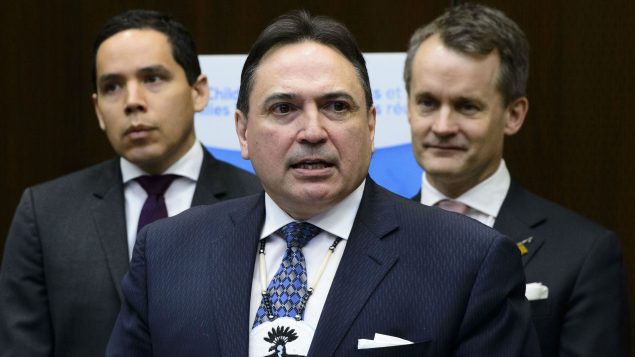 Canada’s Inuit, First Nations and Métis organizations say they welcome the Indigenous child protection legislation introduced by the federal government in the House of Commons on Thursday.

“With today’s announcement, the level of ambition of both Inuit and government have aligned to do more to protect Inuit children,” said Natan Obed, the president of Inuit Tapiriit Kanatami (ITK), Canada’s national Inuit organization, in a news release on Thursday.

At a early afternoon press conference in Ottawa on Thursday, Canada’s Indigenous Services Minister, Seamus O’Regan was accompanied by Obed, Carolyn Bennett, Canada’s minister of Crown-Indigenous relations; Jane Philpott, president of the Canada’s Treasury Board; Perry Bellegarde, the national chief of the Assembly of First Nations (AFN), which represents approximately 900,000 people across Canada, and Clément Chartier, the president of the Métis National Council (MNC).

“I am encouraged by ITK’s relationship with Minister O’Regan and the Department of Indigenous Services and anticipate further discussions between Inuit leadership and government as this legislation moves forward,” Obed said.

Indigenous nations to have jurisdiction

Bill-92 states that First Nations, Inuit and Métis have jurisdiction over child and family services for children from their nations. The bill also establishs the factors that would need to be considered to determine the best interests of an Indigenous child, including things like cultural continuity and the importance of the child’s relationship to its community and nation.

The bill was developed with input from the ITK, the AFN and the MNC.

“This legislation is first and foremost about First Nations children and their safety, their security and their future,” said the AFN’s Bellegarde in a news release.

“The tragedy of thousands of First Nations children in care tells us we need a new approach. This legislation will recognize First Nations jurisdiction so they can build their own systems based on their own governance, laws and policies. Our focus has to be on prevention over apprehension, and keeping children close to their cultures and families.  We need investments to support this work, and we need everyone to support this approach. The time is long overdue for First Nations to finally regain responsibility over our children.”

The legislation is in response to longstanding issues in Canada that have seen Indigenous children over-represented in foster care, predominantly with non-Indigenous families.

According to the 2016 census, 52.2% of children in foster care are Indigenous even though they only make up 7.7 per cent of Canadian children under 15.

The bill still needs to go for several readings, be debated in parliament and studied in committee before it becomes law.