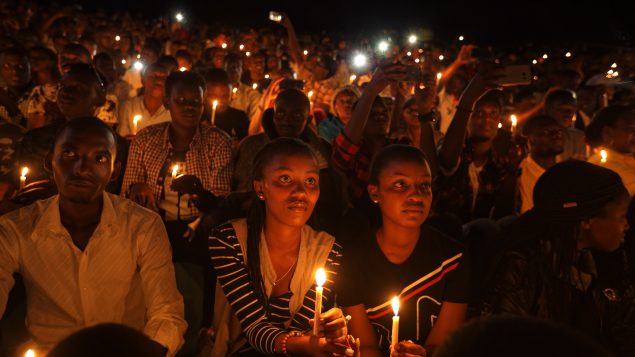 Canadians from coast to coast to coast marked the 25th anniversary of the Rwandan genocide on Sunday while a Canadian delegation headed by Gov. Gen. Julie Payette participated in the commemoration of the 1994 slaughter of Tutsis and moderate Hutus in the Rwandan capital of Kigali.

Payette, accompanied by more than a dozen Canadian politicians, civil society and human rights activists laid a wreath on behalf of Canada at the Kigali Genocide Memorial and witnessed the lightning of the Flame of Remembrance by President Paul Kagame.

A night vigil to honour the spirit of resilience and reconciliation of the Rwandan people. In 1994, the stadium served as a @UN Protected Site for nearly 12,000 Tutsi refugees. #Kwibuka25 #GGRwanda #Rwanda #Kigali #remember #Unite #Renew pic.twitter.com/bcCRcjzsah

“Today, we remember one of the darkest chapters in recent history – the 1994 genocide against the Tutsi in Rwanda, which began twenty-five years ago to the day,” Prime Minister Justin Trudeau said in a statement.

“In the months that followed, more than 800,000 innocent people –Tutsis, moderate Hutus, and others – were senselessly and brutally murdered in an organized campaign of genocide.”

Trudeau offered Canada’s deepest sympathies to their families and loved ones, and those still living with the pain and trauma caused by the atrocities.

“Today, we also honour the bravery of all those who risked their lives to save others in this dark time,” Trudeau said.

“We recognize the members of the United Nations peace support mission in Rwanda, including Canadian peacekeepers and Gen. Roméo Dallaire, who, in spite of their small number and limited mandate, did everything in their power to protect those seeking refuge.”

Dallaire, who was in charge of the UN peacekeeping mission during the genocide against the Tutsi minority, said in an interview with The Sunday Edition host Michael Enright that he has not forgiven himself and world leaders like former U.S. President Bill Clinton for failing to stop the slaughter by the Rwandan military and Hutu militia.

In the months leading up to the genocide, Dallaire repeatedly warned the UN Security Council something catastrophic was brewing. But he said world leaders were too concerned with preventing peacekeeper casualties to let him act.

“This genocide – like all others – showed the world the unconscionable cost of division and hatred. I ask all Canadians to take time today to remember those who lost their lives twenty-five years ago,” Trudeau said. “We can honour them by fighting hate, protecting the most vulnerable, and working to make our world a better one.”