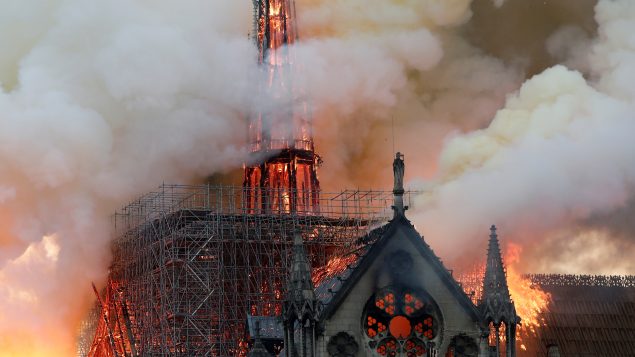 It is “absolutely heartbreaking” to see the Notre-Dame Cathedral in flames, Prime Minister Justin Trudeau tweeted Monday as Canadians across the country watched in horror and disbelief images of the iconic 12th-century Paris landmark being devoured by a raging blaze.

“Canadians are thinking of our friends in France as you fight this devastating fire,” Trudeau tweeted.

“Notre-Dame’s majesty and beauty have captured the hearts of millions worldwide,” Scheer tweeted. “Praying for everybody’s safety and a speedy response.”

Absolutely heartbreaking to see the Notre-Dame Cathedral in flames. Canadians are thinking of our friends in France as you fight this devastating fire.

My heart breaks to see the iconic Notre Dame cathedral up in flames. Notre Dame’s majesty and beauty have captured the hearts of millions worldwide. Praying for everybody’s safety and a speedy response.

The blaze, which was noticed shortly before 7 pm local time, collapsed the cathedral’s spire and spread to one of its landmark rectangular towers. A spokesman said the entire wooden frame of the cathedral would likely come down, and that the vault of the edifice could be threatened too.

“Everything is burning, nothing will remain from the frame,” Notre-Dame spokesman Andre Finot told French media. The Gothic-style Catholic cathedral is home to incalculable works of art and is one of the world’s most famous tourist attractions, attracting nearly 14 million tourists and pilgrims every year. 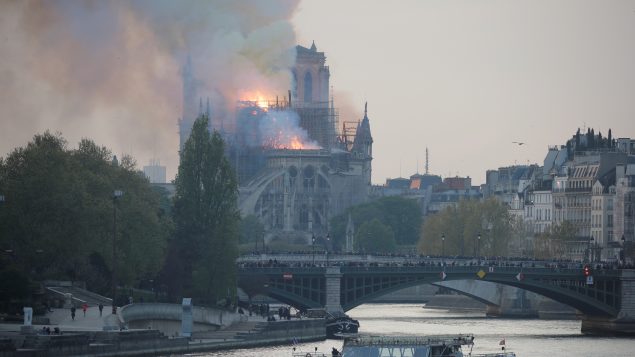 Smoke billows from Notre-Dame Cathedral after a fire broke out, in Paris, France Apr. 15, 2019. (Charles Platiau/REUTERS)

Cardinal Thomas Collins, Archbishop of Toronto, said Canadian Catholics stand in solidarity with their brothers and sisters in the Archdiocese of Paris during this very tragic event “at this time when their church is burning.”

“And we pray that they will be able to recover from this and go on to live what the beauty of the great cathedral represents,” Collins said.

“Such sad and terrifying images,” tweeted Montreal Mayor Valerie Plante. “I am pained to see the flames ravage such a world heritage jewel. I’m with Parisians and the French with all my heart.”

The cause of the blaze was not known, but French media quoted the Paris fire brigade as saying the fire is “potentially linked” to a $9 million renovation project on the church’s spire and its 250 tons of lead. Prosecutors opened an investigation as Paris police said there were no reported deaths.

Flames shot out of the roof behind the nave of the cathedral, among the most visited landmarks in the world. Hundreds of people lined up bridges around the island that houses the cathedral, watching in shock as acrid smoke rose in plumes.

French President Emmanuel Macron, cancelled a planned address to the nation, and rushed to the scene and straight into meetings at the Paris police headquarters nearby. 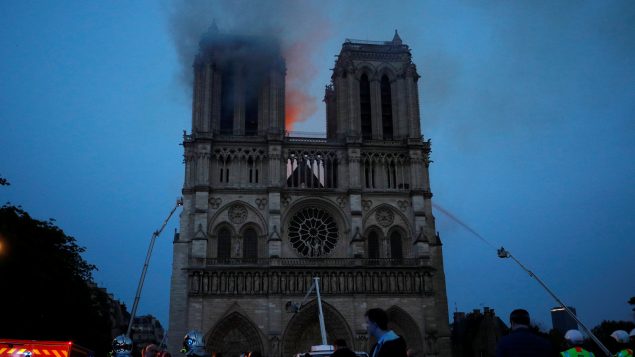 Paris Fire brigade members spray water onto the facade of the Notre-Dame Cathedral during the visit by French President Emmanuel Macron (not pictured) in Paris, France, Apr. 15, 2019. (Philippe Wojazer/REUTERS/Pool)

Built in the 12th and 13th centuries, Notre-Dame is the most famous of the Gothic cathedrals of the Middle Ages as well as one of the most beloved structures in the world. Situated on the Ile de la Cite, an island in the Seine river, the cathedral’s architecture is famous for, among other things, its many gargoyles and its iconic flying buttresses.

Among the most celebrated artworks inside are its three stained-glass rose windows, placed high up on the west, north and south faces of the cathedral. Its priceless treasures also include a Catholic relic, the crown of thorns, which is only occasionally displayed, including on Fridays during Lent.

The cathedral was immortalized in Victor Hugo’s “The Hunchback of Notre Dame,” published in 1831, and has long been a subject of fascination in popular culture as well as the traditional art world.