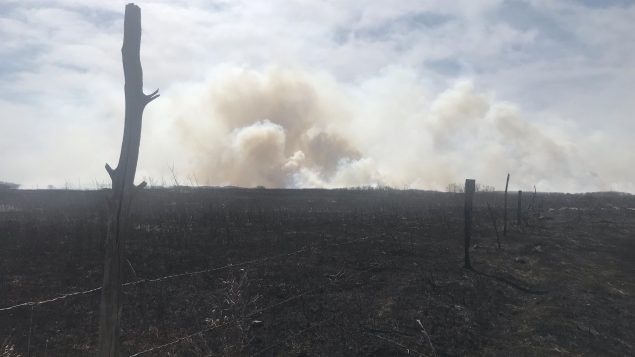 ‘Out of control’ grass fire burns in central Saskatchewan

Officials in the prairie province of Saskatchewan have declared a state of emergency in the town of Biggar and the Rural Municipality of Biggar, about 90 kilometres west of Saskatoon, as a raging grass fire filled the area with smoke.

Officers with the Royal Canadian Mounted Police began evacuating an area southwest of Biggar and warned people to avoid the area because of a fire burning “out of control” since Monday night.

Here’s a look at the #skfire situation in #Biggar today.

The rural municipality and the town of Biggar, Sask., issued a state of emergency this morning after a large grass fire filled the area with smoke.

A large grass #skfire prompted a state of emergency in the area. Read the latest: https://t.co/ZHKXLCWkNa #yxe #yqr pic.twitter.com/8qsDzpyLCu

Strong winds and dry conditions have complicated efforts to battle the flames. More than 30 municipalities have declared fire bans and are asking residents to be extra careful.

In many places farmers have been using their own machinery to build fire breaks in hopes of slowing down the blaze.