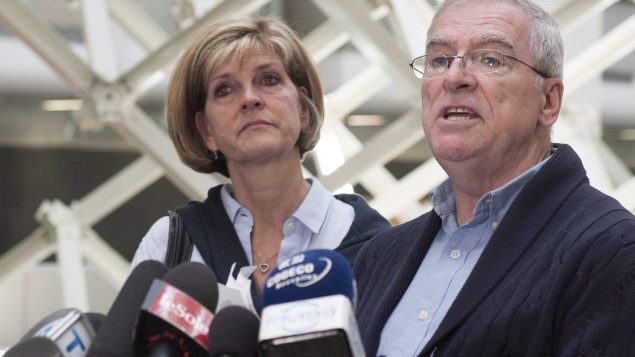 Raymond Bissonnette, father of Alexandre Bissonnette who pleaded guilty in the 2017 mosque shooting, reads a statement to media as his wife Manon Marchand looks on, Thursday, June 21, 2018 at the hall of justice in Quebec City. The father of the Quebec City mosque shooter is urging Prime Minister Justin Trudeau and others to stop referring to his son as a terrorist. (Jacques Boissinot/THE CANADIAN PRESS)

The father of the man, who went on a shooting spree in a Quebec City mosque two years ago, killing six worshippers and injuring six others, is urging Prime Minister Justin Trudeau and others to stop referring to his son as a terrorist.

Alexandre Bissonnette was sentenced in February to life in prison with no chance of parole for at least 40 years for the fatal mosque attack in January 2017.

He was not charged with terrorism, but Trudeau and others have referred to his actions in those terms.

The night of the shooting, Trudeau described it as a “terrorist attack on Muslims in a centre of worship and refuge.”

“Following a thorough and exhaustive investigation where each and every aspect of Alexandre’s life was carefully scrutinized, the Crown filed several charges of first degree murder and attempted murder against Alexandre,” writes Raymond Bissonnette in open letter to Trudeau.

The judge who tried his son also confirmed that the crime committed cannot be qualified as terrorism, Bissonette writes.

He added that his son’s crime was extremely terrible and severe, and that the absence of terrorism charges in no way diminishes the gravity of the crime “but it has no link to terrorism or to any particular ideology.”

Bissonnette says “qualifying a person or a crime as a ‘terrorist’ adds a social and political dimension that can have serious consequences.”

“It also seems to me that the label attached to Alexandre has greatly increased the danger for my family,” Bissonnette writes.

As an example of the supposed threat to the family’s safety, Bissonnette pointed out that in April 2017 a man flew from the UK to Quebec in an attempt to find the family.

“The danger to my family is real,” Bissonnette writes.

That individual was arrested for making threats, pleaded guilty, and deported from Canada.