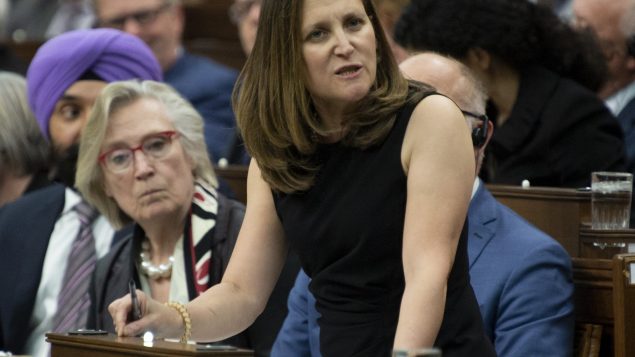 Foreign Affairs Minister Chrystia Freeland responds to a question during Question Period in the House of Commons Monday May 27, 2019 in Ottawa. (Adrian Wyld/THE CANADIAN PRESS)

Foreign Affairs Minister Chrystia Freeland introduced a motion in the House of Commons Monday that sets the stage for the introduction of legislation needed to ratify a renegotiated free trade agreement between Canada, the U.S. and Mexico.

The ways and means motion is the first step on the road to ratification of the Canada-U.S.-Mexico Agreement, which will affect some tax and financial measures adopted by the federal government.

It also signals that legislation to adopt the revised version of the North American Free Trade Agreement (NAFTA) is expected to be introduced within days, perhaps, as early as Wednesday.

“This is a very important agreement for Canadians,” Freeland told reporters, speaking outside the House of Commons.

“And even more than the agreement itself, what is very important for Canadians and Canadian jobs is continued privileged access to the U.S. market, which is so central to our economy and to the jobs and wellbeing of so many Canadians.”

Freeland said she was confident the legislation to ratify the free trade deal between the three North American neighbours will be adopted by the parliament.

“As Canadians understand very well, when it comes to ratification of the new NAFTA, of course, the entry into force of this agreement does not depend solely on Canada,” Freeland said.

“The new agreement can enter into force only upon ratification in each of the three NAFTA countries and that is why we are working in very close collaboration with our NAFTA partners.”

The Trump administration cleared one of the major roadblocks on the way for the ratification of the new trade agreement when it lifted its contentious tariffs on Canadian and Mexican steel and aluminium products last week.

Canada has only a short time window to pass its implementation bill into law before Parliament rises for the summer, and before the federal election campaign. Similar implementation bills for other trade treaties have taken longer than the remaining time left between now and the end of June.