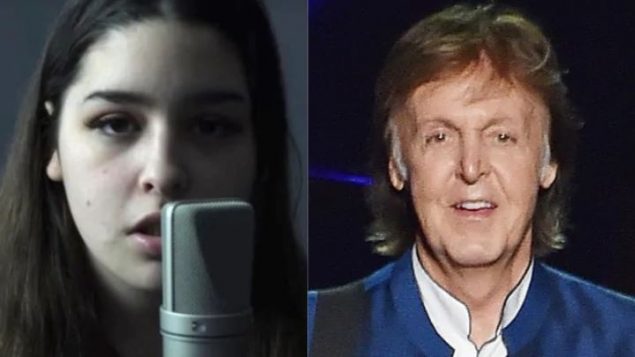 A dream has come true for Cape Breton teen Emma Stevens, who sang a stunning rendition of Blackbird in Mi'kmaq, and her music teacher Carter Chiasson. (YouTube; Mike Coppola/Getty Images)

Thousands of people tagged McCartney on social media, but he didn’t comment publicly — until now.

“There’s an incredible version done by a Canadian girl. You see it on YouTube. It’s in her native language,” McCartney said in a video from a tour stop in Lexington, Ky. “It’s really cool, check it out.”

#EmmaStevens gets a shout out by @PaulMcCartney “There’s an incredible version done by a Canadian girl, see it on youtube, its in her native language.” See her play at the opening of the @unhabitat @UN #UNHabitatAssembly – https://t.co/CqMSgF1VuE #paulmccartney #blackbird pic.twitter.com/WsuQaaczp3

Stevens said in an interview on CBC Radio she hopes to one day release a full album in the Mi’kmaq language, which is spoken by fewer than 10,000 people.

“Those lyrics kind of make me feel more hopeful, more inspired to, like, learn my language more than I already know, and to show non-Mi’kmaq people the beauty of the song in our language,” the 16-year-old told As It Happens host Carol Off.

“I know it’s just, like, a little cover, but in our language, it’s really beautiful and it just makes a big impact.”

The lyrics of the McCartney classic were translated into Mi’kmaq by Katani Julian and her father Albert “Golydada” Julian.

It wasn’t an easy task Julian told As It Happens as some concepts simply don’t exist in the Mi’kmaq language.

“More than anything, we are all hoping that this helps bring widespread awareness to the importance of preserving indigenous language and culture, and the United Nations International Year of Indigenous Languages movement,” Chiasson told CBC Radio’s q. “We are beyond excited about the awareness that this is bringing to Mi’kmaq language and culture in particular, and to our home, Unama’ki (Cape Breton). Thank you, Paul McCartney!”