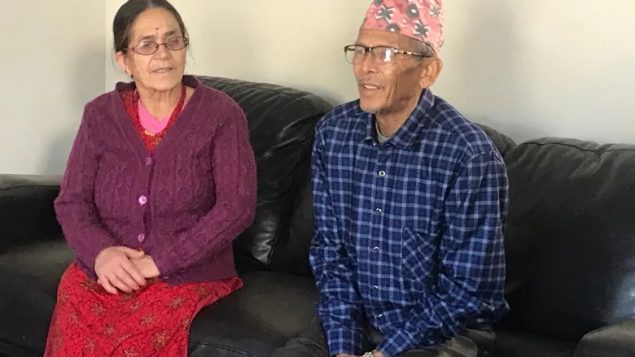 Narayan Karki, left, and her husband, Chhaya, sat just steps from the WestJet service counter at the Vancouver airport for almost 12 hours, until the RCMP found them. (Rosa Marchitelli/CBC)

A family’s emotional nightmare unfolds in plain sight in Vancouver

It was one of those nightmare scenarios that every family fears to the very roots of its collective bones.

Elderly parents, strangers in a strange land with no knowledge of English, get marooned in an airport, abandoned and terrified while a waiting family has no idea where they are.

Happened in February in Vancouver.

Chhaya and Narayan Karki, aged 66 and 69, were on the final leg of a trip from their home in Kathmandu, Nepal  to visit their son Mohan and his family in Edmonton. 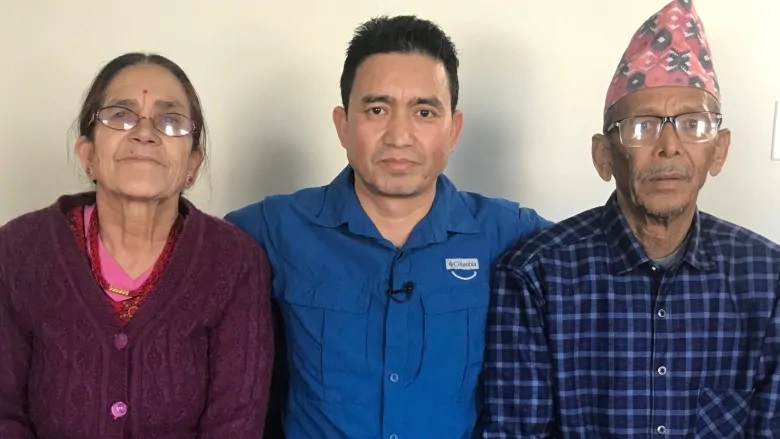 The Karkis missed their flight from Vancouver to Edmonton after being left in their wheelchairs without assistance for hours at the airport. They were travelling from Nepal to visit their son, Mohan, shown at centre. (Rosa Marchitelli/CBC)

Nobody’s exactly sure how and why it happened.

Only that it happened.

Mr. and Mrs. Karki wound up not making their connection from their Cathay Pacific flight to their WestJet connection to Edmonton.

Left stranded in their wheelchairs hard by the WestJet counter, no one seemed to notice them and the couple spent the the next 12 hours there as their frantic family in Edmonton tried to find out what was going on.

“We were thinking they were somewhere in the corner of the airport…not knowing where to go,” Mohan Karki told CBC New’s Rosa Marchitelli.

“My parents told me, ‘We never left this place’…12 hours they were there. They tried to communicate with some other people, passersby, and nobody responded to them.

Mohan Karki says Cathay Pacific told him it took his parents to the WestJet counter, but the couple never made it on their next flight. They spent almost 12 hours sitting in wheelchairs at the airport. (CBC)

“Maybe they couldn’t understand what they were saying.”

When his parents failed to arrive in Edmonton, Mohan Karki spent hours on his cell phone trying to find some answers.

Neither of the airlines was able to locate the elderly couple, who had placards with their son’s name an phone number, in case of emergency.

Mohan Karki said no one responded when his parents held the placards up.

Karki finally called the RCMP, which located Mr. and Mrs. Karki in 20 minutes, just steps from the service counter.