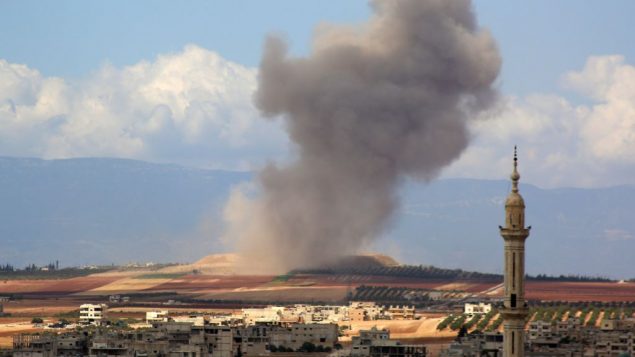 Smoke raises in the Syrian village of Kafr Ain in the southern countryside of Idlib province after an airstrike on September 7, 2018. (Anas Al-Dyab/AFP/Getty Images)

A dramatic escalation of conflict in northwestern Syria is hampering some of the United Nations’ critical food distribution activities in the area as hundreds of thousands of refugees flee the fighting, says the World Food Program.

The upsurge of fighting in northern Hama, southern Idlib and western Aleppo governorates, which began in late April, has forced more than 300,000 people to flee, most heading towards the camps for internally displace people (IDP) in northern Idlib, close to the Turkish border, the UN agency says.

Due to the latest wave of violence that broke out on Apr. 30, the WFP and its partners at times have had to “temporarily interrupt distributions in the southern parts of Idlib due to the conflict,” it says.

It ads that since May, WFP has not been able to reach some 7,000 people in the area of Qalaat al-Madiq that witnessed intense fighting recently.

“We’re witnessing a catastrophe unfolding in the northwest due to the latest bombardment that has affected hundreds of thousands of people,” said Marwa Awad, a Canadian who works as the WFP spokesperson in Syria. 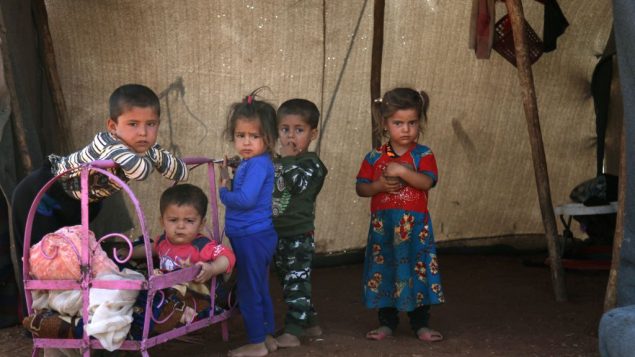 Syrian children stand outside a tent next to a metal crib at a camp for displaced civilians fleeing from advancing Syrian government forces, close to a Turkish military observation point near the village of Sarman in the rebel-held northwestern Idlib province on September 5, 2018. (Amer Alhamwe/AFP/Getty Images)

UN agencies and their humanitarian partners on the ground are racing against time to answer the needs and provide shelter and food, as well as nutritional assistance to the IDPs, Awad said in a phone interview with Radio Canada International.

“The conditions are very, very difficult right now because of the bombardment and of course because of the trauma that people are living through and unless that escalation stops, more lives will be lost and displacement will continue in this entire region,” Awad said.

The refugees from the southern parts of Idlib and Hama have so far remained in Syria and the influx hasn’t spilled over into Turkey, she said.

This has put a lot of pressure on the IDP camps, Awad added.

“There is a compound of multiple camps in the northern part, closer to the border with Turkey, and it’s now beyond capacity,” Awad said. “There are people when they arrive, they’re given tents, but there is no space for them to pitch their tents. This is how bad it is.”

There are many tents that shelter up to four families of five people or more, she said.

“People are literally living on top of each other,” Awad said, “and the humanitarian response is stretched to its utmost limit.” 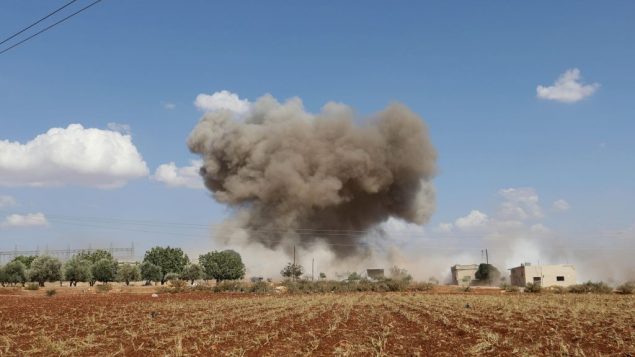 In addition to displacing hundreds of thousands of people, the recent bombardment has also affected some of Syria’s most fertile and productive agricultural areas, with thousands of acres of farmland that have been burnt in recent weeks, Awad said.

“This will undoubtedly affect the food security situation of this area,” Awad said. “This is the harvest season now until mid-June and farmers are no longer able to access their fields.”

Fires are affecting farmers across Syria, not just in northern Idlib, she added.

“We’ve heard of fires in the governorates of Raqqa – this is in the northeast – in Homs, in Hasakeh and in Deir Ezzor,” Awad said. “These areas don’t have conflict but what we’re hearing is that the fires were the result of high temperatures and the possible detonation of unexploded ordinance but we’re still investigating this with our partners in other UN agencies.”

As a result of the latest surge in violence and loss of livelihoods, WFP is scaling up its monthly deliveries of food rations to reach 823,000 people across the northwest through its cross-border operations via Turkey, WFP said. Prior to April, WFP was reaching approximately 600,000 people in the northwest every month.