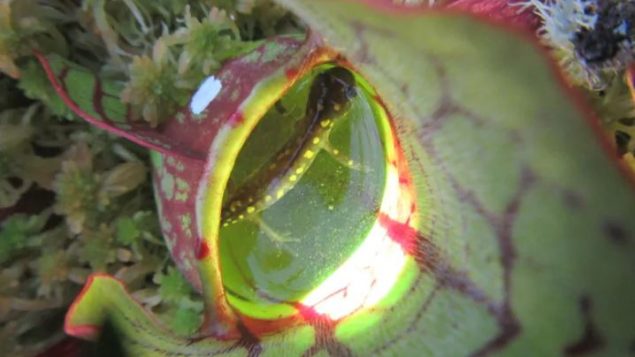 It looks like something out of the pages of a horror thriller.

And a Canadian researcher says his hair still stands on end when he thinks about the moment he first spotted a pitcher plant that had devoured a juvenile salamander in an Ontario park.

Alex Smith, a University of Guelph biologist, told CBC Radio’s As It Happens, he was in Algonquin Provincial Park last August doing field work with a group of undergraduate students when he made the discovery in a bog.

“I peek over one of the little cups and I bend it towards the student and instead of seeing a collection of decaying spiders and insects and other deliciousness for that plant, I see a juvenile yellow spotted salamander,” Smith told As It Happens host Carol Off. “And I say WTF!”

It’s believed to be the first documented case in North America of a vertebrate-eating pitcher plant. Most carnivorous plants are thought to eat invertebrates and arthropods, such insects and arachnids.

“It’s not that they were uncommon – the plants are common, the salamanders are common – it’s just the interaction of the two that was a real surprise,” Smith said.

Smith and co-lead author Patrick Moldowan of the University of Toronto published their findings earlier this week in the Ecology journal.

Botanical carnivory is an evolutionary marvel of the plant kingdom that has long fascinated researchers, the paper said.

Carnivory in plants has evolved multiple times across the world, often in wet, open, and nutrient‐poor environments, as an alternative pathway of nutrient acquisition, it said.

Bell-shaped pitcher plants have developed special leaves known as pitfall traps to catch their prey. The pitfall traps, which contain a digestive enzyme and rain water, have very smooth waxy edges, which makes it nearly impossible for their prey to escape once they falls into them.

With files from Sarah Jackson of CBC News