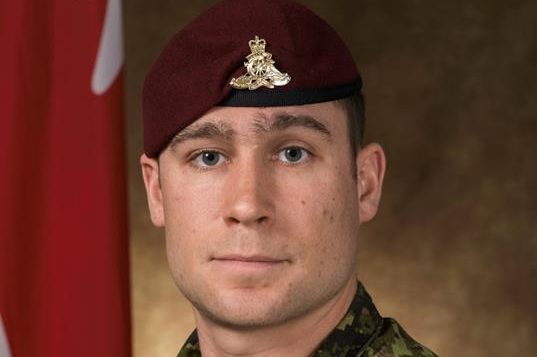 Bombardier Patrick Labrie was killed during a parachute training exercise in Bulgaria. (CAF)

Speaking to reporters in Ottawa, Sajjan identified the soldier as Bombardier Patrick Labrie, a member of the 2nd Regiment, Royal Canadian Horse Artillery based at 4th Canadian Division Support Base Petawawa, about 160 kilometres northwest of Ottawa.

Officials said Labrie died in a parachuting accident near Cheshnegirovo, in central Bulgaria, at around 10 p.m. local time on Monday.

“It’s a deep sadness that we lost a Canadian Armed Forces member yesterday,” Sajjan told reporters in Ottawa on his way into a cabinet meeting. “Next of kin has been informed and I want to pass on our deep condolences, not only to the family, but also on to all the members who served with Bombardier Labrie.”

An investigation will be launched into the incident, Sajjan said.

Canadian soldiers were part of a U.S.-led multinational training exercise taking place from June 8 to 27 in various locations throughout Bulgaria, Croatia and Romania.

The exercise, codenamed Swift Response 2019, aims to advance airborne interoperability between the U.S. military and other NATO allies.