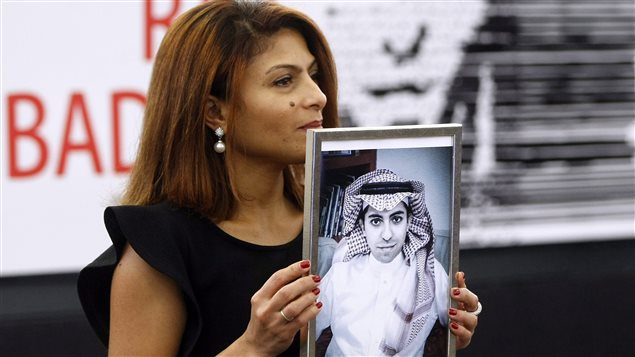 After she was granted refuge in Canada, Ensaf Haidar has worked hard to try to obtain her husband’s release. (Christian Lutz/AP Photo)

The wife of jailed Saudi blogger Raif Badawi and his supporters in Canada are welcoming comments by U.S. Vice-President Mike Pence Thursday calling on Saudi Arabia to release him.

Speaking at a conference on religious freedom in Washington on Thursday, Pence not only criticized human rights violations in China, Iran, North Korea, Nicaragua and Venezuela, but also raised the controversial incarceration of Badawi in Saudi Arabia, Washington’s close ally in the Middle East.

“In Saudi Arabia, blogger Raif Badawi is still in prison for the alleged crime of criticizing Islam through electronic means,” Pence said.

Badawi’s wife, Ensaf Haidar, who lives in Sherbrooke, Quebec, with her three children, said the surprising mention of her husband’s plight was the first time a Trump administration official has publicly raised his case.

“Raif is not a criminal, he fights for the rights of women,” Haidar told Radio-Canada.

In another interview with The Canadian Press, Haidar said she would like to meet President Donald Trump to talk about how he can help free Badawi.

“Trump is the only solution at the moment,” Haidar told The Canadian Press.

The Saudi government has postponed subsequent floggings due to Badawi’s fragile health but has not lifted the sentence. 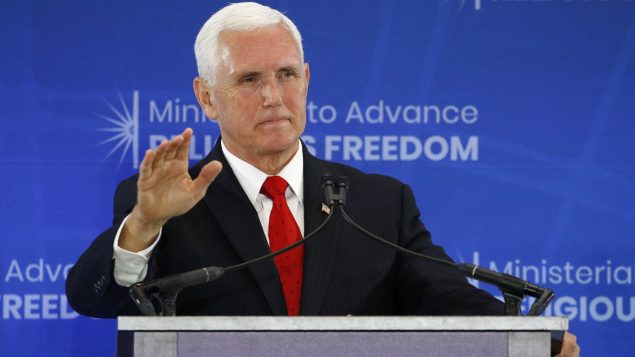 In addition to Badawi, Pence called Abune Antonios, patriarch of the Eritrean Orthodox Church, Mohamed Cheikh Ould Mkhaitir of Mauritania and Junaid Hafeez of Pakistan prisoners of conscience who should be released.

“All four of these men have stood in defence of religious liberty and the exercise of their faith despite unimaginable pressure, and the American people stand with them,” he said.

“Today, the United States of America calls upon the government of Eritrea, Mauritania, Pakistan and Saudi Arabia to respect the rights of conscience of these men and let these men go.”

Marie-Pier Baril, spokesperson for Foreign Affairs Minister Chrystia Freeland, said the promotion and protection of human rights — including the right to freedom of expression, conscience, and religion or faith — is an integral part of Canada’s foreign policy.

“We remain extremely concerned by the case of Raif Badawi,” Baril said in a statement to Radio Canada International. “We have raised it at the highest levels and we have repeatedly called for clemency to be granted.”

Prime Minister Justin Trudeau has also spoken directly with the King of Saudi Arabia and Freeland has raised Badawi’s case with her counterpart, Baril said.

In January, Haidar met with Trudeau and Freeland to discuss her husband’s fate amid ongoing tensions between Ottawa and Riyadh.

“We remain in contact with Ms. Haidar and we want to see Mr. Badawi reunited with his family,” Baril said. “We will continue to raise our concerns over his situation both in Riyadh and Ottawa.”

Saudi Arabia expelled Canada’s ambassador in Riyadh and recalled its own ambassador in Ottawa last year amid a diplomatic showdown over Canada’s calls to release jailed Saudi women activists, including Badawi’s sister, Samar.

Saudi Arabia also froze all investment projects in Canada, cancelled flights to and from Toronto, and ordered thousands of Saudi students studying in Canada to transfer to universities in other countries.

With files from Radio-Canada and The Canadian Press