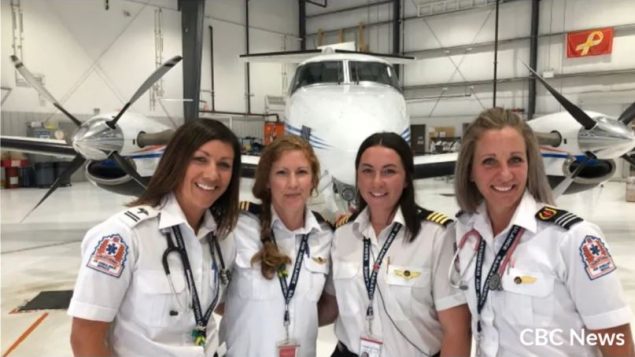 Crystal Lybeck, a flight nurse, poses for a photo in front of an air ambulance, with crew members and pilots Tammie Kulyk, Carly St. Onge and paramedic Jen Rondeau. The four were the first all-woman flight crew to take to the skies in a Saskatchewan Air Ambulance. (Morgan Modjeski/CBC)

History has been made in Saskatchewan and it happened thousands of feet off the ground.

Over the weekend Saskatchewan Air Ambulance responded to its first call with an all-women flight crew. It’s the first time in the organization’s 73-year history that all four crew members on the plane were women.

Pilots on the historic flight, Carly St. Onge and Tammie Kulyk, alongside paramedic Jen Rondeau and flight nurse Crystal Lybeck were the four to respond to the call, which was for a man experiencing respiratory distress in the community of Buffalo Narrows.

The team said they had no idea there would be such a positive response to the historic flight, but they started to get feedback from former patients, pilots and the public alike when news of the all-women flight hit social media… more