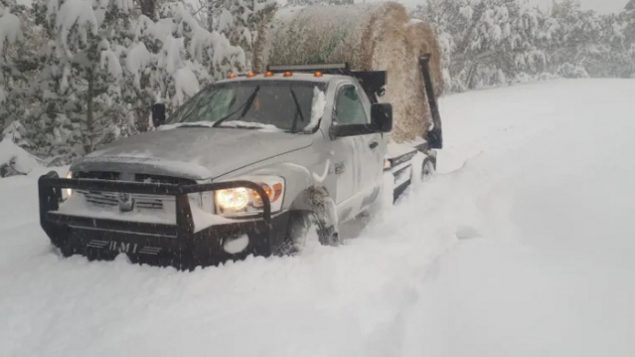 Vehicles were stuck in heavy snow in the southwestern part of Alberta province and hundreds of collisions occurred. (rbgibbfarms/Twitter/CBC)

The western province of Alberta was walloped by a major storm which started early on Saturday and dumped as much as 95 cm of snow in the southwestern corner of the province. There were more than 300 vehicle collisions and travel advisories were issued lasting into Monday due to blowing snow which reduced visibility.

Several flights out of Calgary were cancelled on Sunday and extra crews were called in to clear runways and roads.

On Monday, many public schools south of the city of Calgary cancelled classes as did the University of Lethbridge. The storm was bad news for farmers who were still trying to finish the harvest. 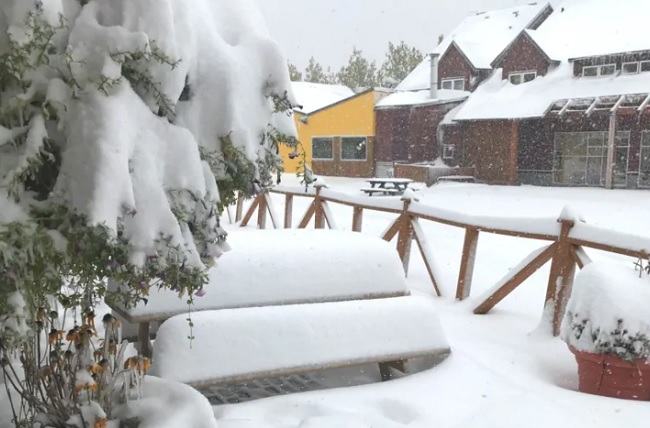 This is a sight Canadians often seen outside their windows between November and April, but certainly not one they expect at the end of September. (Leanna Van Zeumeren/CBC)

Snow not unusual in Alberta’s spring and fall, but…

Alberta gets two-thirds of its snow in the autumn (September, October and November) and spring (March, April and May). That’s when moist air from the Pacific meets frigid air that sometimes flows in from the north. But usually the snow will fall in a one-day event. This storm is unusual in that it will have lasted three days.

Canadian government statistics show that between 1884 and 2011, Calgary had the greatest snowfall the weekend of September 27 in 1925. And at that time the snowfall ranged between 6.6 and 19.8 cm. By Monday mornbing about 25 cm had falling on the city of Calgary and much more in the extreme southwest part of the province.

The snow will melt as temperatures go up. Snowfall is occurring in the neighbouring province of Saskatchewan but will turn into rain as it moves east.