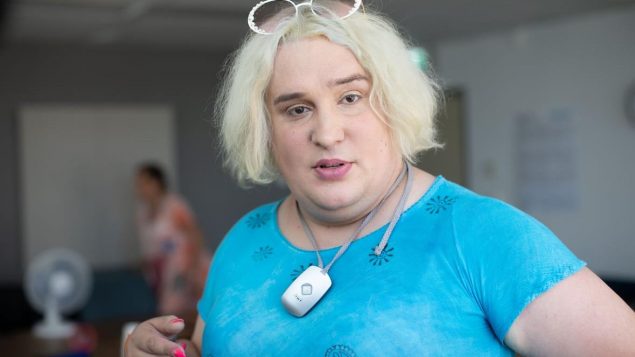 Jessica Yaniv speaks to media after the final day of hearings in July, 2019. The B.C. Human Rights Tribunal found Tuesday she had not been discriminated against by estheticians who refused her waxing services. (Maggie MacPherson/CBC)

The British Columbia Human Rights Tribunal has ruled against a transgender woman who brought 15 discrimination complaints after she was refused genital waxing services at more than a dozen beauty salons.

In a decision released Tuesday, the tribunal also ordered the complainant, Jessica Yaniv, to pay $2,000 each to all three of the estheticians who filed a defence in the case, noting that “human rights legislation does not require a service provider to wax a type of genitals they are not trained for and have not consented to wax.”

Yaniv, who identifies as female but has male genitalia, contacted the businesses through Facebook messages requesting appointments, including for a Brazilian wax which is a service to remove most or all female pubic hair.

The respondents, mostly immigrant women, who operate their home-based businesses in the Vancouver area providing services to women, testified they declined to wax Yaniv for various reasons, including religious grounds, personal safety concerns, and lack of training when it came to male genitalia.

Jay Cameron of the Justice Centre for Constitutional Freedoms, a non-profit law firm that represented five of the women, said Yaniv filed complaints against them alleging discrimination based on gender identity and gender expression.

In total, Yaniv filed 15 complaints against various estheticians in the Vancouver area seeking as much as $15,000 in damages against each esthetician.

At the hearings in July, Yaniv contended that immigrants use their religion to discriminate against trans people because they refused to wax the male genitals of those who identify as women, he said.

“Self-identification does not erase physiological reality,” Cameron said in a statement. “No woman should be compelled to touch male genitals against her will, irrespective of how the owner of the genitals identifies.”

“Taken together, the factors which I have identified above persuade me that Ms. Yaniv’s overriding purpose was to manufacture the conditions for human rights complaints against unsophisticated and vulnerable respondents, in order to secure a financial settlement and punish individuals involved,” Cousineau wrote.

“In a majority of her cases, she also had the added motivation of punishing racialized and immigrant women whom she stereotypes as hostile to the interests of the LGBTQ+ community. Far from advancing the cause of LGBTQ+  people, Ms. Yaniv’s conduct would, if condoned, threaten this Tribunal’s integrity and its  mission to foster an equitable, tolerant, and respectful society.”