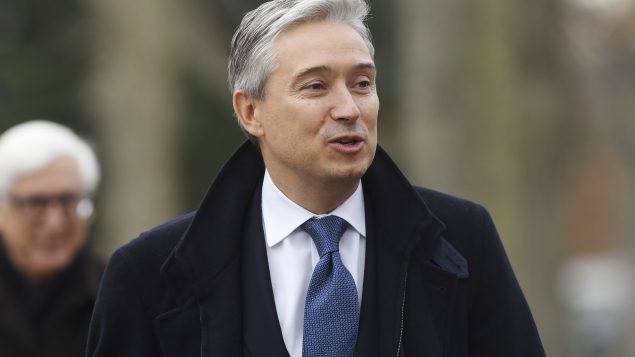 Liberal MP Francois-Philippe Champagne arrives for the cabinet swearing-in ceremony in Ottawa on Wednesday, Nov. 20, 2019. Champagne, who was named Canada's foreign affairs minister will be travelling to Japan to take part in the G20 ministerial meeting in the city of Nagoya. (Adrian Wyld/THE CANADIAN PRESS)

Barely two days after being sworn in as Canada’s new foreign affairs minister, Francois-Philippe Champagne will be jetting off to Japan to take part in the G20 Foreign Ministers’ Meeting.

Champagne, who has already served in the previous Liberal cabinet as international trade minister and later handled the infrastructure portfolio, will make his debut as Canada’s top diplomat at the two day meeting in Nagoya that kicks off on Nov. 22.

At the meeting, Champagne will participate in discussions related to free trade and global governance, the Sustainable Development Goals, which was the theme of Japan’s rotating presidency of the G20, and support for Africa, officials at Global Affairs Canada said in a statement.

He will also have a number of meetings with his counterparts to “advance Canadian interests,” the statement added.

“The G20 offers Canada an opportunity to strengthen collaboration with the world’s most advanced economies to address pressing challenges,” Champagne said in a statement. “I look forward to working with my colleagues to strengthen the rules-based international order and contribute to a more open, prosperous and peaceful world.”

Champagne will also participate in the Ministerial Meeting of the Non-Proliferation and Disarmament Initiative (NPDI), Global Affairs officials said.

The meeting in Nagoya will be an opportunity for Champagne to get to know his counterparts and listen to their concerns, said Jocelyn Coulon, a foreign policy expert and author of the recently published book entitled Canada Is Not Back: How Justin Trudeau Is In Over His Head On Foreign Policy.

‘Not a thinker, but an operator’

Champagne is not a thinker, but an operator, someone who delivers, said Coulon who had served as an adviser to former foreign affairs minister Stephane Dion.

But Champagne has inherited from his predecessor Chrystia Freeland some monumental foreign policy challenges, Coulon said.

What began as a promising relationship with China has turned into a diplomatic crisis after Canada’s arrest of Huawei executive Meng Wanzhou upon U.S. request and Beijing’s retaliatory detention of two Canadians and economic sanctions, Coulon said.

Trudeau’s disastrous trip to India in February 2018 was a setback for the relationship between the two countries, and New Delhi is still suspicious of the Liberals’ involvement with some elements of the Sikh independence movement in Canada, Coulon said.

And finally, it seems that Champagne is more open for a dialogue with Russia than was the case with Freeland who was a staunch supporter of Ukraine and was put by the Kremlin on the list of Canadian politicians barred from travelling to Russia, Coulon said.

“It is too often forgotten that Canada has just two neighbours — the United States and Russia — both of whom are great powers,” Coulon said. “Russia and Canada control 75 per cent of the Arctic therefore we have to have a constructive dialogue with Russia and I hope Champagne will be able to push for that.”

However, it’s also not clear how much leeway Champagne will get from Prime Minister Justin Trudeau to chart a different foreign policy and whether Freeland will continue interfering with attempts to reset the fraught relations with Moscow as she had done when her predecessor Dion had advocated for engaging with the Kremlin, Coulon said.