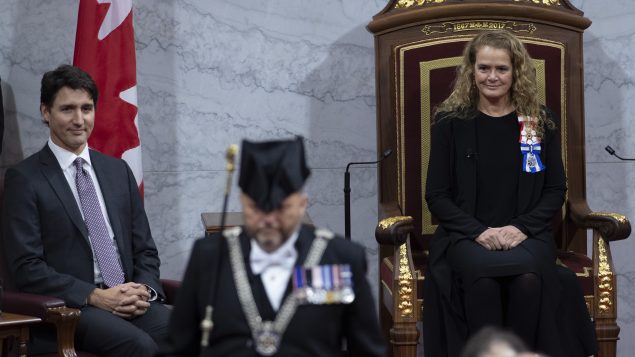 Gov. Gen. Julie Payette and Prime Minister Justin Trudeau watch as Usher of the Black Rod Greg Peters leaves to summon members of the House of Commons for the Throne Speech in the Senate chamber, Thursday Dec. 5, 2019 in Ottawa. (Sean Kilpatrick/THE CANADIAN PRESS)

In a ceremony steeped in centuries of British and more recent Canadian Parliamentary tradition, Gov. Gen. Julie Payette, The Queen’s representative in Canada, welcomed the country’s 43rd Parliament as she read the prepared text of the throne speech, outlining the government’s priorities.

While the governor general delivers the remarks, the text of the throne speech itself is written by the Prime Minister’s Office.

“Your predecessors first sat in Parliament in November 1867. Canada was barely five months old,” Payette said, harkening back to Canada’s first steps as a parliamentary democracy. “On the scale of world history, we are still very young .Yet much has happened in the world since then. We have matured, and we are here – strong and free.” 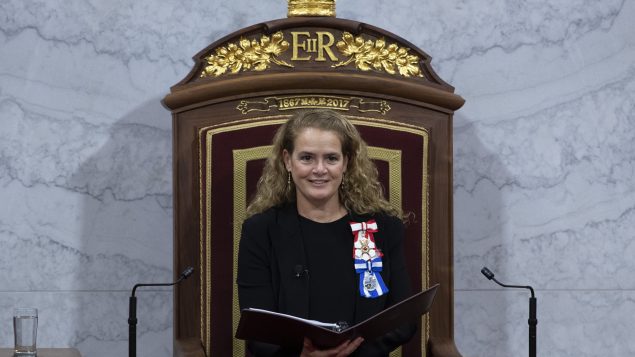 The throne speech struck a conciliatory tone as the Liberal government of Prime Minister Justin Trudeau acknowledged that it has heard the message sent by Canadian voters in the Oct. 21, federal election.

“This fall, Canadians went to the polls. And they returned a minority Parliament to Ottawa,” Payette said. “And so we open this 43rd Parliament with a call for unity in the pursuit of common goals and aspirations.”

The Liberals signalled that climate change action, which was the key issue of the election, will remain the top priority of their government.

“A clear majority of Canadians voted for ambitious climate action now,” Payette said. “And that is what the government will deliver.”

Payette said the government is committed to achieving net-zero emissions by 2050.

“The government will also act to preserve Canada’s natural legacy, protecting 25 per cent of Canada’s land and 25 per cent of Canada’s oceans by 2025,” Payette said. “Further, it will continue efforts to reduce plastic pollution, and use nature-based solutions to fight climate change – including planting two billion trees to clean the air and make our communities greener.”

On the economic front, Payette said the government will provide even greater support to the middle class and the most vulnerable Canadians by pursuing tax fairness.

“As its first act, the government will cut taxes for all but the wealthiest Canadians, giving more money to middle class families and those who need it most,” Payette said.

The speech also acknowledged growing concerns in Western Canadian provinces of Alberta and Saskatchewan, which have been hit hard by the downturn in the energy sector, one of the key drivers of their and Canada’s economy.

“The government has heard Canadians’ concerns that the world is increasingly uncertain and that the economy is changing. And in this context, regional needs and differences really matter. Today’s regional economic concerns are both justified and important,” Payette said.

The speech said the Liberal government is committed to getting “Canadian resources to new markets,” a reference to the Trans Mountain expansion pipeline project currently under construction after years of delays.

While promising climate action, the government has also said building this pipeline to tidewater is in the national interest as it will deliver Alberta oil to markets abroad at better prices.

Reconciliation with Indigenous people remains a core priority for the government, Payette said.

The Trudeau government will also will crack down on gun crime, banning military-style assault rifles and taking steps to introduce a buy-back program, the governor general said. 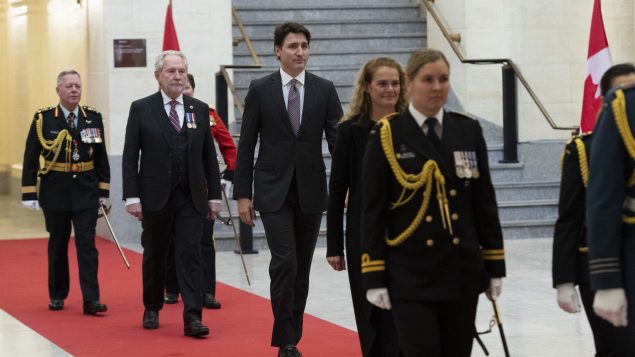 Gov. Gen. Julie Payette and Prime Minister Justin Trudeau look towards Members of Parliament during their procession to the Senate for the reading of the Throne Speech, in Ottawa, Thursday, Dec. 5, 2019. (Justin Tang/THE CANADIAN PRESS)

The government will also work to strengthen Canada’s trade and security ties with international partners and work with like-minded nations in areas like the promotion of democracy and human rights, the fight against climate change and for environmental protection, and the development and ethical use of artificial intelligence, Payette said.

“The government will renew Canada’s commitment to NATO and United Nations peacekeeping,” Payette said. “It will stand up for the rules-based international order when that order is put in question, particularly when it comes to matters of trade and digital policy.”

And Canada will continue seeking one of the rotating seats on the UN Security Council, she said.

“These are not simple tasks. But they are achievable if you stay focused on the people who sent you here,” Payette said. “Moms and dads. Grandparents and students. New Canadians, business owners and workers. People from all walks of life. Every one of them expects their Parliamentarians to get to work and deliver on a plan that moves our country forward for all Canadians.”

“There is nothing in the throne speech talking about preparing Canada for a potential economic downturn with many warning signs on the horizon, nothing about our energy workers in Alberta and Saskatchewan, nothing about our forestry workers in British Columbia,” said Scheer, who is also the Leader of the Official Opposition. “And most importantly, nothing really on national unity.”