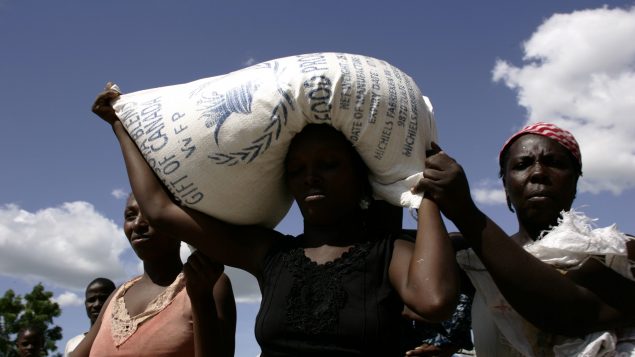 Haitians carry food donated by the World Food Program on a street in the town of Gonaives Sept. 20, 2008. (Eduardo Munoz/REUTERS)

The United Nations World Food Programme (WFP) says it needs $82 million ($62 million US) to provide emergency food assistance to 700,000 people in Haiti, as the poorest Caribbean nation struggles to deal with political unrest, economic downturn and a drop in agricultural production.

“Haiti, as you may know, has been experiencing a bit of a protracted socio-economic and political crisis since about June 2018,” said Raphael Guevin-Nicoloff, a Canadian program officer with WFP. “It’s been characterized by recurrent civil unrest episodes, stagnant economy – in fact a contracting economy over 2019 – severe currency depreciation and increases in food prices.”

Demonstrations began in September against President Jovenel Moise over allegations of corruption and mismanagement, paralyzing the island nation of 11 million. Protesters have barricaded roads and the electrical grid has broken down, plunging much of the island into darkness. Gangs have profited from the chaos to expand their territory. 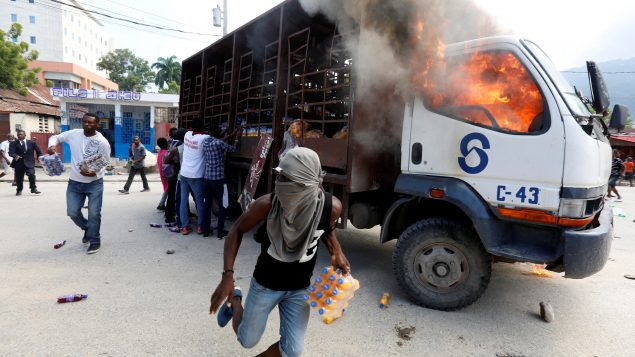 Demonstrators loot a burning truck after the wake of demonstrators killed during the protests to demand the resignation of Haitian president Jovenel Moise in Port-Au-Prince, Haiti Nov. 19, 2019. (Jeanty Junior Augustin/REUTERS)

The combination of fuel shortages and unrest further deteriorated the situation in Haiti, Guevin-Nicoloff said in a phone interview from WFP headquarters in Rome, Italy.

“The impact of the economic crisis is such that needs have been severely increased – we’re talking about 47 per cent more people who are facing severe hunger in rural areas in Haiti,” said Guevin-Nicoloff, who serves as WFP’s Deputy Regional Desk for Latin America and the Caribbean Department of Emergencies.

But the overall picture differs across the country, he added.

“The first thing that is noticeable is that people will limit their movement because of the deteriorating security situation, so that will jeopardize their access to food,” Guevin-Nicoloff said. “And because people don’t dare to move so much and that businesses have been closed, some people have lost their livelihoods or have diminished incomes.”

In a country like Haiti, which imports most of its food, that means that many people can’t afford the basic necessities, he said.

“In other areas the way you can observe the crisis unfolding is that the security situation, the road blocks, have affected the regular supply chains,” said Guevin-Nicoloff. “And therefore, some markets may no longer receive sufficient quantities of foods.” 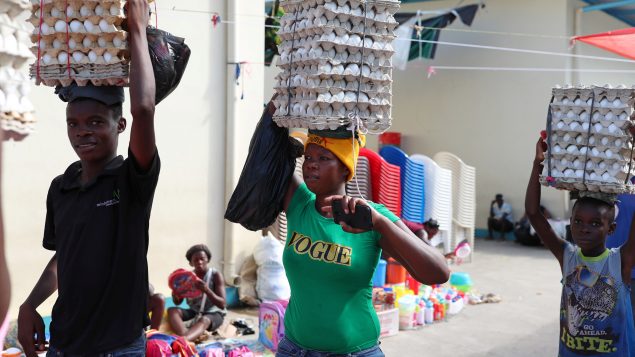 In certain isolated or remote areas, the availability of food itself can be a problem, he added.

“While we still have assessments underway, one of our concerns is the potential augmentation of acute malnutrition cases, especially among children and among pregnant and lactating women and girls across the country, including in urban areas,” Guevin-Nicoloff said.

The unrest has hampered humanitarian organizations’ efforts too. Transport of WFP food to many vulnerable communities, particularly using the main roads between the capital Port-au-Prince and Artibonite and across southern Haiti, has been affected.

But the UN agency has found some workaround solutions to get food to remote communities, including through sea lifts and using a large Russian-built Mi-8 helicopter to reach communities cut off by roadblocks, Guevin-Nicoloff said. 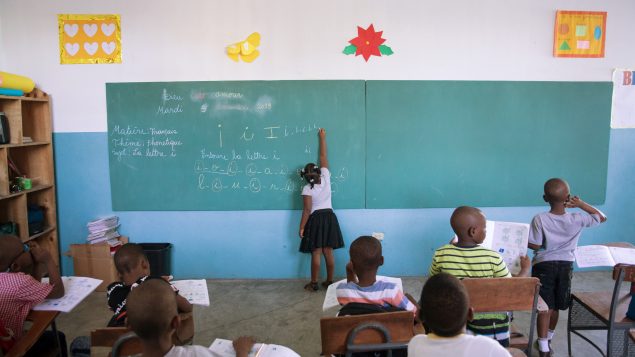 A student writes on the black board during a lesson at the College Saint Pierre-Eglise Episcopale D’Haiti as schools and businesses tentatively reopen their doors after anti-government protests are waning, in Port-au-Prince, Haiti Dec. 3, 2019. (Valerie Baeriswyl/REUTERS)

Recently, a slight improvement in security allowed WFP to deliver food assistance to thousands of families cut off since September, WFP said.

WFP is also expanding distributions and providing cash and vouchers to other areas of Haiti affected by food insecurity. In November, 67,000 people were given cash so as local markets recover, households can purchase food locally.

In addition to emergency assistance, WFP is working with the Haitian government on more long-term projects to address some of the root causes of food insecurity and increase resiliency to such factors as climate change, Guevin-Nicoloff said.