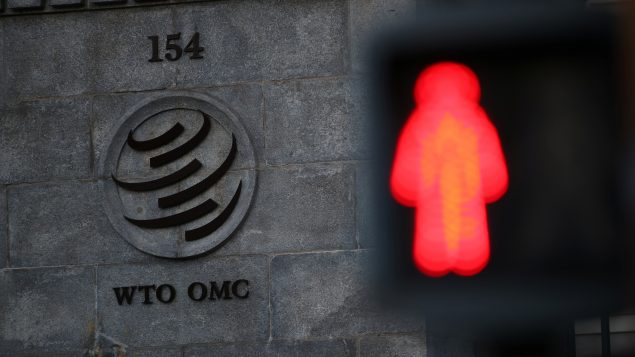 A traffic light is turned red in front of the WTO headquarters in Geneva, Switzerland, Dec. 10, 2019. (Denis Balibouse/REUTERS)

Canada is working with all member states of the World Trade Organization (WTO) to resolve an impasse that threatens the integrity of the global trade body’s dispute resolution mechanism and endangers its very existence, International Trade Minister Mary Ng said Tuesday.

As of Wednesday, the WTO will no longer be able to deliver final trade dispute rulings, after member states failed to solve a dispute between the U.S. and the rest of the international community.

A scheduled three-day meeting among the 164 WTO members that started on Monday in an effort to overcome the crisis was cut short on Tuesday.

“Unfortunately it was not successful,” WTO chief Roberto Azevedo told reporters in Geneva.

Successive U.S. administrations have complained that judges at the organization’s top tribunal, the Appellate Body, have overstepped their mandate by setting legal precedents and by ignoring time limits for delivering decisions.

The Appellate Body is supposed to have seven judges. But their ranks have dwindled because the U.S. – under Presidents George W. Bush, Barack Obama and Donald Trump – has blocked new appointments to protest the way the WTO does business.

Trump and his top trade negotiator, Robert Lighthizer, have argued that the trade organization constrains America’s ability to counter unfair trading practices by China and that the Geneva-based agency is ill-equipped to deal with the challenge posed by the Chinese economy’s unconventional blend of capitalism and state control.

“The dispute settlement system of the World Trade Organization (WTO) is key to providing the stability businesses need for rules-based international trade,” Ng said in a statement

The WTO’s rules provide predictability to businesses, and help foster economic growth and prosperity as a result, she added.

The Liberal government of Prime Minister Justin Trudeau has worked with other countries, and particularly with the European Union, to find a solution to the worst crisis that has hit the WTO in its quarter century of existence.

“Through the Ottawa Group, Canada has been leading efforts among like-minded partners to preserve a rules-based settlement system until the full functions of the WTO Appellate Body can be restored,” Ng said. “The Canada-European Union interim bilateral agreement is just one example of Canadian leadership to preserve rules-based international trade.”

Guillaume Bérubé, a spokesperson for Global Affairs Canada, said Canada will continue to engage with WTO members to find a lasting solution to the current impasse and welcomes the many proposals put forward so far. Canadian officials are also considering interim arrangements to preserve stability in Canada’s trading relationships until the situation is resolved, he added.

The Interim Appeal Arbitration Agreement between Canada and the EU applies as of Wednesday, when the WTO Appellate Body can no longer hear appeals, Bérubé said.

This arrangement essentially substitutes the Appellate Body with an Arbitral Panel made up of former Appellate Body members under the existing authority at the WTO in Article 25 of the Dispute Settlement Understanding for arbitrations, he said.

“The existing dispute settlement system would continue to function as it does currently, with the exception that any appeals normally heard by the Appellate Body would be heard by this “Article 25 panel” of former Appellate Body members,” Bérubé said.  “All time-frames and procedures of the existing system remain the same.”