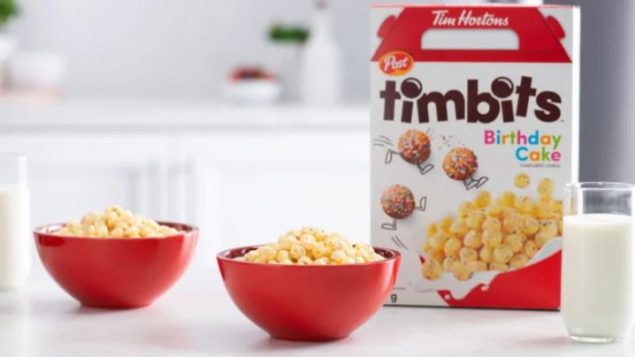 If you’re a lover of Tim Hortons’ Timbits, the tiny bite-sized doughnuts, then you might appreciate their new breakfast cereal inspired by the classic puffs.

The iconic Canadian coffee and fast-food chain has joined forces with Post Consumer Brands, the company behind Honey Bunches of Oats, Shreddies, Honeycomb, to offer consumers in Canada two versions of the cereal based on the tiny doughnuts that have been a staple on the chain’s menu since 1976: one chocolate-glazed flavour, and one birthday cake flavour.

“We’re excited to be launching one of Canada’s favourite snacks in cereal form so Canadians can enjoy two of our delicious Timbits flavours in a whole new way,” said in a statement Samuel Heath, head of retail at Tim Hortons.

The cereals will be available in major grocery chains across Canada beginning in early 2020, the two companies said in a joint press release.

However, not everyone is enthusiastic about the appearance of another breakfast cereal containing lots of sugar.

#TimHortons® and Post Foods® Canada have teamed up to market #Timbits® cereal to Canadians. With 1/3 of children 5-17 years old overweight or obese, do we really need a new very high sugar cereal that has 30 g of carbs and only 1 g of protein per cup? https://t.co/0oZhMwhQb4 pic.twitter.com/fxrlLhBJuP