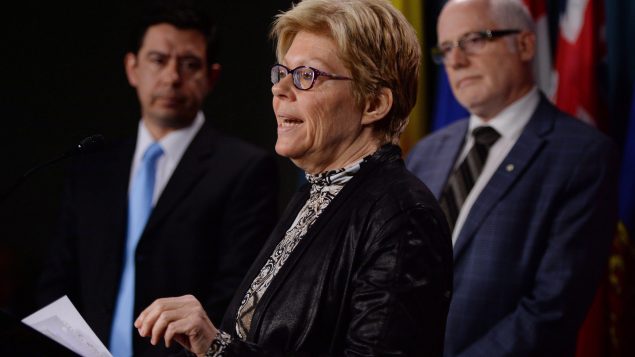 Peggy Mason of the Rideau Institute speaks as Alex Neve of Amnesty International Canada, right, and Cesar Jaramillo of Project Ploughshares, left, looks on during a press conference on Parliament Hill on Wednesday, Apr. 27, 2019, regarding their open letter to Prime Minister Justin Trudeau calling for an end to the arms deal with Saudi Arabia. (Sean Kilpatrick/THE CANADIAN PRESS)

Canada has plenty of opportunities to show leadership on the international stage, says Peggy Mason, president of the Rideau Institute, an independent foreign policy and defence think tank.

These include taking on a greater role – and not necessarily a military one – in UN peacekeeping operations, working on defending and strengthening international law, leading an international campaign to ban weapons in space and killer robots.

But first, Ottawa needs to conduct a root-and-branch foreign policy review and reinvest massively in its diplomatic cadres, says Mason.