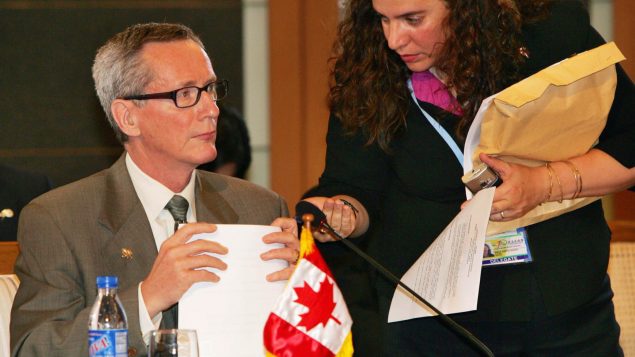 Canada's Deputy Foreign Minister Leonard Edwards gets a briefing from his staff before the start of the Post Ministerial Conference in the 40th ASEAN Ministerial Meeting and the 14th ASEAN Regional Forum Wednesday, Aug. 1, 2007 in Manila. (Pat Roque/AP Photo)

Canada needs a “revolution” in its foreign policy thinking to deal with the tectonic geopolitical changes going on in the world, says Leonard Edwards, a former Canadian Deputy Minister of Foreign Affairs.

“The issue is how do we manage within an international frame where there is tension between the United States and China and where we will be caught in the middle on some issues?” Edwards told Diplomatic Dispatch during an interview in Ottawa at the sidelines of the Summit on Canada’s Global Leadership at the end of November.

“And I think that the only way we are going to deal with that is if we stand aside, be more independent, speak more loudly, ensure that we have the security wherewithal to look after ourselves, develop alliances with other major countries – we are a major country in this world, there are number of countries that are feeling exactly the same pressures we are – and to work with them to mitigate the impact of this bilateral split that seems to be evolving.”