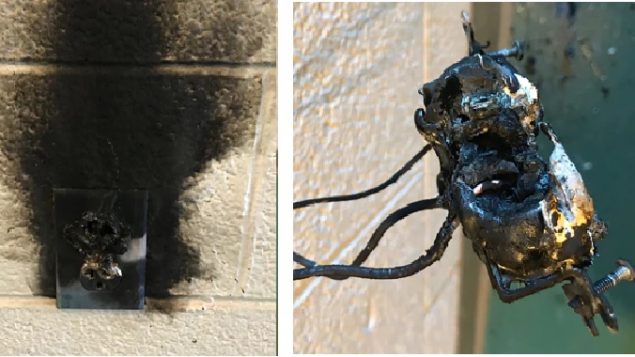 Examples of burnt outlets as a result of the social media "challenge". Dangerous, expensive, potentially deadly. Criminal charges have been laid in some cases (KPRC-2 via CBC)

Remember when did something dumb your friend told you to do and your mom would say, “and if your friend said jump off a bridge would you do that?

It seems for a surprisingly large number of people, social media has become that nasty friend advising them to do something stupid.

In this case it comes from the popular TikTok platform and it’s one of the ‘challenges’ that crop up from time to time.

This so-called “outlet challenge” involves partially plugging a cell phone charger into a wall outlet (although any appliance plug would suffice) and slipping a coin into the still exposed prongs. This creates a short circuit and results in a flame and sparks shooting out. This is recorded on a mobile phone and the video is posted to the net to elicit reaction.

At the very least, the short circuit will result in an inconvenience, and an expensive one when an electrician has to be called. There may also be criminal charges involved depending on where this is carried out

However, it could also easily create a fire, and a slight miscalculation could also result in electrocution, perhaps even fatally.

Dr. Joel Moody, Chief Public Safety Officer for Ontario’s Electrical Safety Authority said in a media release. “Electricity is unforgiving, and no family should have to endure the pain of losing a loved one or their home because of a social media trend.”

I can imagine the conversation when the parents, or building owner asks why you burned down the place, and you say, ‘the internet said I should try it”. And if the internet said you should jump off a bridge?