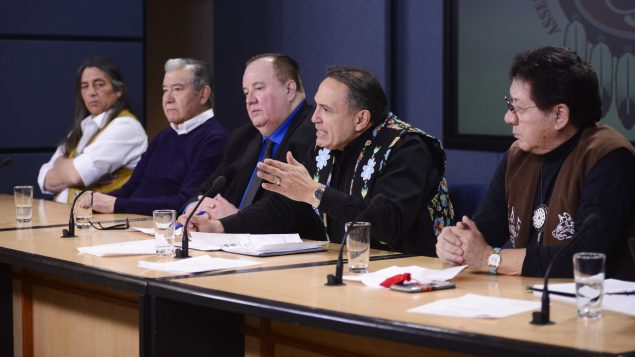 Assembly of First Nations (AFN) National Chief Perry Bellegarde is joined by First Nations leaders as they discuss the current situation and actions relating to the Wet'suwet'en hereditary chiefs during a press conference at the National Press Theatre in Ottawa on Tuesday, Feb. 18, 2020. (Sean Kilpatrick/THE CANADIAN PRESS)

Indigenous leaders on Tuesday appealed for calm and dialogue to resolve a crisis that has crippled much of Canada’s rail traffic amid protests in support of a small group of hereditary Indigenous chiefs in British Columbia who are fighting the construction of a natural gas pipeline through their traditional territory.

The plight of Wet’suwet’en hereditary chiefs in northern British Columbia has garnered support from First Nations and non-Indigenous activists across the country.

Mohawk protesters in Ontario, more than 4,500 kilometres east of Wet’suwet’en lands, have staged a series of protests along a key railway line, disrupting passenger and freight railway services in much of the country.

The rail blockade at Tyendinaga Mohawk Territory, about 240 kilometres west of Ottawa, has led to calls for local and national Indigenous leaders and the federal government to intervene in the crisis that threatens to set back Prime Minister Justin Trudeau’s efforts of reconciliation with Canada’s indigenous peoples, the signature policy of his Liberal government. 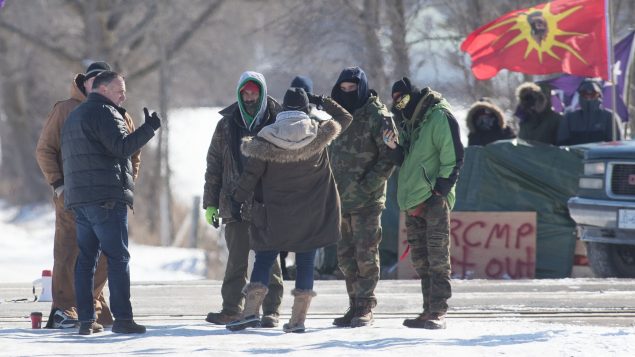 Ontario Provincial Police officers speak with protesters at a blockade of rail lines on Tyendinaga Mohawk Territory, near Belleville, Ont., Friday, Feb. 14, 2020. Protesters erected the blockade in solidarity with the hereditary chiefs of the Wet’suwet’en First Nation, who oppose a major pipeline project that crosses their traditional territory in northwestern British Columbia. (Lars Hagberg/THE CANADIAN PRESS)

National Chief of the Assembly of First Nations Perry Bellegarde told reporters he has reached out to dozens of Indigenous leaders across Canada, the federal and provincial government, as well as industry to try to find a way forward in defusing the crisis.

Mohawk protesters at Tyendinaga Mohawk Territory have vowed to maintain their protests along the CN rail line that passes through their territory until Royal Canadian Mounted Police officers leave the traditional Wet’suwet’en territory.

The 670-kilometre Coastal GasLink pipeline, to move natural gas from north-eastern British Columbia to a liquefied natural gas terminal on the Pacific coast, is a key component of a $40-billion project announced by the federal and provincial governments last fall.

While the pipeline has the support of elected Wet’suwet’en band council members, Wet’suwet’en hereditary chiefs, who have never surrendered title to their traditional territory to the federal or provincial governments, do not recognize Ottawa’s authority and regard the band councils as colonial structures imposed on their people. 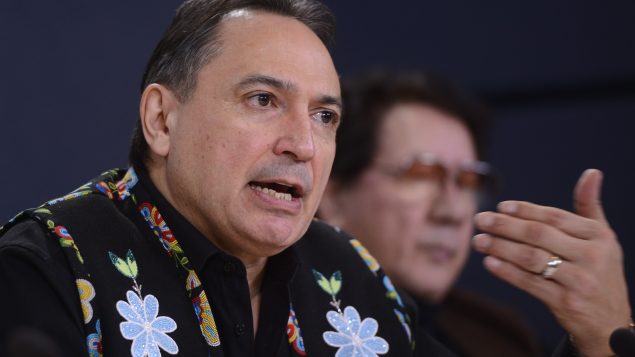 Assembly of First Nations (AFN) National Chief Perry Bellegarde is joined by First Nations leaders as they discuss the current situation and actions relating to the Wet’suwet’en hereditary chiefs during a press conference at the National Press Theatre in Ottawa on Tuesday, Feb. 18, 2020. (Sean Kilpatrick/THE CANADIAN PRESS)

Bellegarde said Wet’suwet’en people need to be given the time and the space to resolve their internal differences.

“We say we want to de-escalate and we want dialogue,” Bellegarde said. “And I say our people are taking action because they want to see action — and when they see positive action by the key players, when they see a commitment to real dialogue to address this difficult situation, people will respond in a positive way.”

Mohawk Council of Kanesatake Grand Chief Serge Otsi Simon called on protesters to end the rail blockades as a “show of good faith.”

“Bringing down the blockades doesn’t mean that you surrender,” Simon said. “It doesn’t mean we’re going to lay down and let them kick us around. No, it would show compassion.”

Simon also warned that the rail blockade could erode public support for reconciliation and the UN Declaration on the Rights of Indigenous Peoples, as well as feeding into right-wing sentiments against Indigenous Canadians.

The 12-day rail blockade has already resulted in some temporary layoffs of hundreds of railway workers and warnings that it could start seriously hurting Canada’s economy.

Bob Masterson, president and CEO of the Chemistry Industry Association of Canada, told CBC News a prolonged shutdown inevitably would lead to shortages of his industry’s products, such as jet fuel for planes, propane for home heating and chlorine for drinking water.