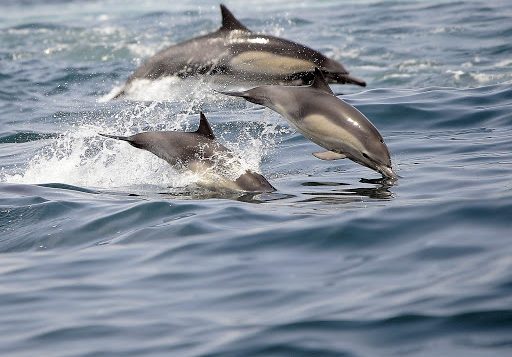 Dolphins frolic around the Habor Breeze Cruises the Triumphant whale watching ship during the Memorial Day weekend trip on the Pacific Ocean off of Long Beach, Calif., Saturday, May 28, 2016. (AP Photo/Nick Ut)

Happened Monday along the British Columbia Coast after more than 15 dolphins got stranded on shore after being chased onto land by a pod of orcas.

According to Susan MacKay, the founder of Whales and Dolphins BC, the dolphins wound up stranded in an old fishing trap escaping the predatory orcas attempting to herd them.

MacKay told CTV’s Adam Chan that once it became clear the dolphins were stuck she was in a group of 20 people that rushed to help the dolphins make it back to the ocean.

Once the humans got involved, MacKay said, the orcas appeared to lose interest and swam away.

“Some of the First Nations people jumped in and started getting the dolphins out,” said MacKay.

“Originally there was a little bit more water in there so they tried pulling it out by the tail, which, of course, wasn’t the best method. Then, finally, some people went and got tarps and blankets and started wriggling them out.”

The group of volunteers was then able to return all 16 dolphins to the ocean, with some remaining near the edge of the water to ensure that all of the dolphins did not try to return to shore.

“It was pretty amazing how everyone jumped in to help out,” said MacKay.

With files from CTV (Adam Chan)