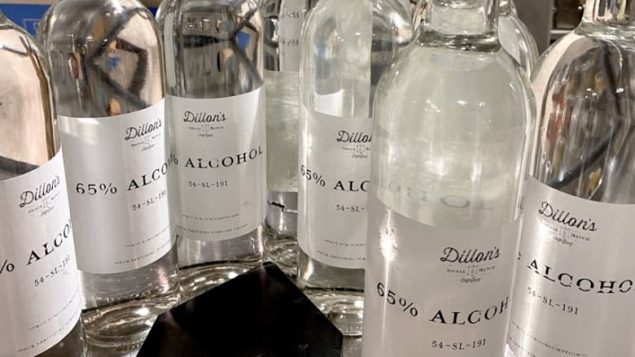 Dillon's distillery has joined many other small distillers to turn out hand sanitizer which has become a much needed commodity due to the COVID-19 virus. All say they have plenty of alcohol for the product but what is now in short supply are new small bottles to put it in. (photo: twitter-dillonsdistills, via CBC)

– Filling an urgent social need in the face of profiteering

Across Canada a number of small distilleries have changed their routine for two reasons.

The first is that because of the virus demand for their products has dropped dramatically especially as many bars have closed or reduced operations. The second and just as important is generally for altruistic reasons.

Several distillers say they were dismayed at attempts by individuals to profit from the COVID=19 crisis by buying up stocks of hand sanitizer causing shortages, and then selling at inflated prices on the internet.

All distillers say they have plenty of the main ingredient, alcohol, and it can be used without much difficulty in changing from say, gin, vodka, or rum production to sanitizer production. As alcohol production is tightly regulated in Canada, there are some legal approvals needed to make the switch, but apparently nothing major.

Compass Distillers in Halifax was among those dismayed at profiteering and have always been involved in their community. In the face of shortages of sanitizer and the profiteering, they switched to sanitizer production and are seeking to give away the sanitizer they make within the community.

Another small Nova Scotia distiller about 200 kilometers north of Halifax, Steinhart Distillery, has also switched but is selling the product in order to be able to keep paying the small staff. They will donate 20 per cent of each order to local food banks.

In Toronto, Spirit of York distillers has joined the movement. Quoted in the Toronto Star, founder Gerry Guitor said, “We were appalled at this person who was hoarding this hand sanitizer and trying to sell it on Amazon and eBay, and we were talking about how, in times of crisis, you always get people who try to take advantage of the crisis. And we said, ‘Well, what can we do?”

What they did was look up a recipe from the World Health Organisation, and were shortly switching over some production. All of their proceeds from sales will go to local food banks, with some product given away to local residents who can’t afford it.

About 90 kilometers away in the Niagara peninsula, Dillon’s Small Batch Distillers in Beamsville, has also joined the movement. Developing a recipe last week, he has already distributed several thousand small bottles to local police, front line health care workers, the City of Hamilton, and to Meals on Wheels, the not profit that delivers meals to the elderly and others who are housebound, unable to get out to do their own grocery shopping.

Other small local distillers across the country have also made a switch such as Victoria Distillers in Sydney B.C. Noting that after each batch of gin produced they had left over alcohol, they began collaboration with a B.C skin care product company to produce sanitizer to be given to people working in ‘essential services”, such as police, firefighters, medical staff and even grocery store workers, who in this time of crisis have also become essential.

Sanitzer must be at least 65 per cent alcohol to be effective, but also must contain a moisturising agent to prevent skin from drying out, along with other elements to make it distasteful to discourage drinking it.