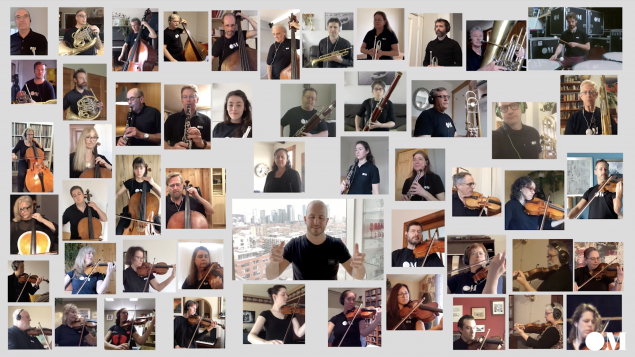 Defiant in the face of the pandemic that has shut down concert halls and silenced live performances around the world, Montreal’s Orchestre Métropolitain marked the end of its 2020 season with a special parting gift for music lovers in Canada and around the world.

Led by their artistic director, world-famous conductor Yannick Nézet-Séguin, 53 musicians of the orchestra came together for a unique remote presentation of “Nimrod” from Edward Elgar’s Enigma Variations.

‘You’re the heart and soul of this orchestra’

In a message to their supporters, the orchestra thanked them for their “extraordinary show of support and outpouring of love for the OM.”

“You’re the heart and soul of this orchestra.” the members of the orchestra said in a news release.

“Throughout this unprecedented period that has pushed us to reinvent ourselves, the Orchestre Métropolitain is continuing to bring music to life because we know deep in our hearts that we’ll see you again soon, on stage and in our concert halls. And we’ll be even stronger and more united than ever before.”

Founded in 1981, Orchestre Métropolitain has become one of the most preeminent Canadian symphony orchestras under the baton of Nézet-Séguin, who was named artistic director of the orchestra in 2000, at the age of 25.

Elgar’s Enigma Variations was part of the concerts the OM presented in November of 2017, first in Montreal and then on its first international tour in Germany, France, the Netherlands.