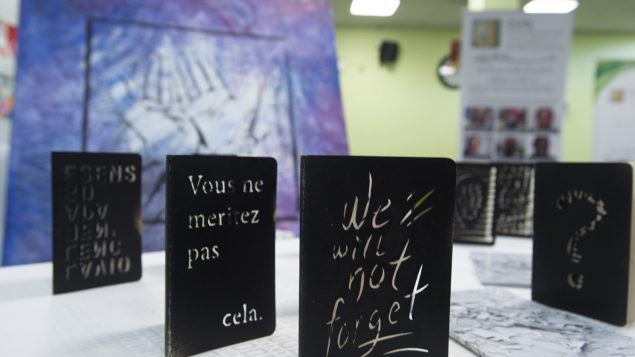 Messages from all over the world are displayed on tables and walls inside the mosque marking the third anniversary of the shooting, Wednesday, January 29, 2020 in Quebec City. Six people died on Jan. 29, 2017 in the deadly mosque shooting. THE CANADIAN PRESS/Jacques Boissinot

Quebecers honoured for their brave actions during 2017 mosque shooting

Canada’s Governor General Julie Payette is honouring five Quebecers for their brave actions during the 2017 mosque shooting in Quebec City, according to a news release from yesterday.

Azzedine Soufiane will receive the Governor General’s Star of Courage posthumously for sacrificing his life when he attempted to disarm Bissonnette.

Said Akjour and Mohamed Khabar are being awarded the Medal of Bravery for attempting to confront the shooter.

Hakim Chambaz is being honoured with the Medal of Bravery for saving a young girl during the shooting.

Aymen Derbali will be awarded with the Medal of Bravery for distracting the shooter. In order to protect other worshippers, Derbal drew the attention of Bissonnette and was shot seven times and left paralyzed.

The Canadian Bravery Decorations were established in 1972 by Queen Elizabeth II to symbolically express the nations’ gratitude to people who have defied their instincts for self-preservation and risk their lives to protect or save the lives of others.

The five Quebecers are among a list of 123 Canadians who will be recognized for their bravery, excellence, courage and or exceptional service.