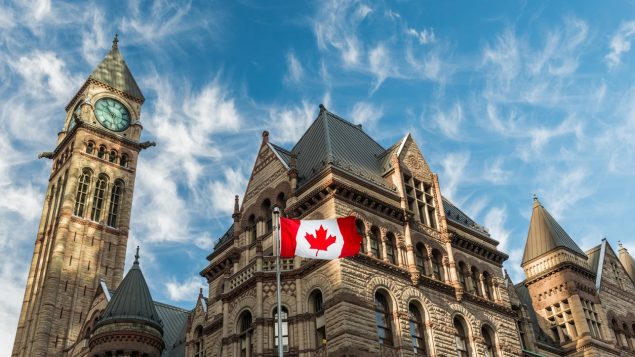 The Canadian flag flies before the Old City Hall in Toronto, Canada. A study from the Canadian Red Cross has shown that the COVID-19 pandemic has affected cannabis and alcohol consumption by Canadian adults. (iStock/Vincent_St_Thomas)

A new study from the Canadian Red Cross has shown that the COVID-19 pandemic has affected cannabis and alcohol consumption by Canadian adults, according to a press release.

The survey also found that the pandemic has led to a 23 per cent net gain in alcohol consumption for Canadians aged 18-34, which Dr. Paul Hebert, the medical and science advisor for the Canadian Red Cross, finds concerning.

“Most young adults, 66 per cent, are consuming no more – or even less – alcohol than prior to COVID-19,” Hebert said in a press release.  “While that is encouraging, we remain concerned for those heading in the other direction, as the pandemic is often a magnifier of pre-existing vulnerabilities.”

The Canadian Centre on Substance Use and Addiction (CCSA) said that the findings regarding the use of alcohol among young Canadians are similar to their own results.

Rita Notarandrea, the chief executive officer of the CCSA said that though substance use has not increased for a majority of young Canadians, there needs to be concern for the young Canadians who are not coping well.

“This appears to be related to stress, anxiety, loneliness, boredom and a lack of regular routine, but more research and analysis is needed in this area,” Notarandrea added.

The Canadian Red Cross surveyed 2,280 Canadians to track the public perception about the social and psychological impacts of the COVID-19 pandemic.