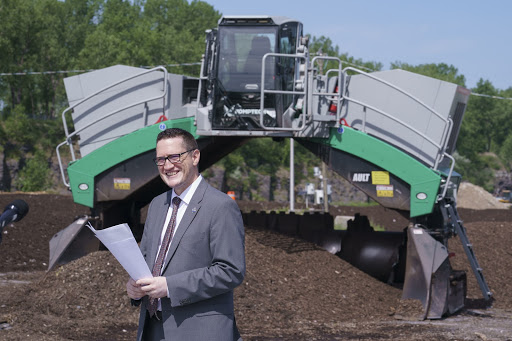 Quebec Environment Minister Benoit Charette is seen next to a compost turner during a news conference in Montreal on Friday, July 3, 2020. (The Canadian Press/Paul Chiasson)

Quebec invests $1.2 billion in the collection of organic materials

The Quebec government is investing $1.2 billion over the next 10 years to help municipalities within the province establish compost collection and compost processing plants, according to an announcement from Benoit Charette, the province’s minister of environment.

With the investment, the Quebec government wants to have compost collection services for all Quebec citizens as well as have 100 per cent of industries, institutions and businesses composting by 2025.

Currently, just over half of the Quebec population, 57 per cent, has access to a food waste collection service.

“Since coming into power, our government has taken important action to improve the collection and recovery of our residual materials,” Charette said in a press release. “Today we are taking another step forward by investing $1.2 billion to divert organic material from disposal sites and ensure their recovery, which will contribute to a significant reduction in our greenhouse gas emissions.”

According to the press release, organic matter makes up 60 per cent of the 5.8 million tonnes of residual materials eliminated each year in Quebec.

The province is also aiming to reduce their output of greenhouse gas by 270,000 tonnes of carbon dioxide equivalent gasses per year, as well as recycle and recover 70 per cent of all organic material by 2030.

Suzanne Roy, the president of the Union of Quebec Municipalities (UQM), said that the UQM sees the strategy unveiled today as a firm commitment by the Quebec government to set up partnerships with local governments and financial support to achieve the objective of recovering organic materials.

“The government’s announcement is targeting ambitious objectives that cannot be realized without the participation of local governments and the necessary investment of means and sums,” Roy said.

With files from CBC News and Jennifer Yoon