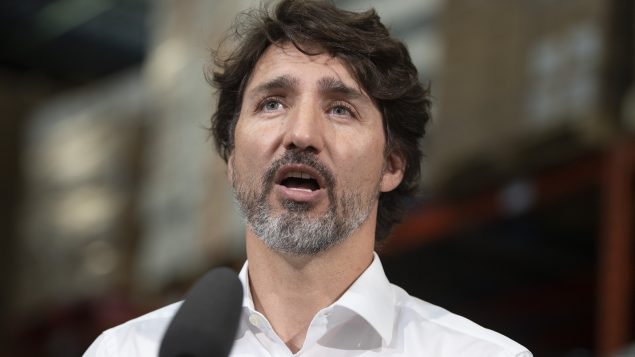 Prime Minister Justin Trudeau delivers a statement about the situation in Hong Kong at the start of a news conference in Gatineau, Que., Friday, July 3, 2020. (Adrian Wyld/THE CANADIAN PRESS)

Canada is ending the export of sensitive military goods to Hong Kong and suspending its extradition treaty with the territory after Beijing imposed its new national security law on the city, Prime Minister Justin Trudeau announced Friday.

The federal government is also working on updating its travel advisory for Hong Kong, Trudeau told reporters during a briefing in Gatineau, Quebec.

In the days and weeks to come, Canada is also looking at additional measures, including around immigration, Trudeau added.

“We are extremely concerned about the situation in Hong Kong,” Trudeau said.

“We will continue to look at responses, working closely with out allies, including with our Five Eyes allies, who’ve made very strong statements in regards to the decision by the Chinese government to move forward and weaken the ‘one country, two systems’ principle that is so important, not just to us but to the 300,000 Canadians who live in Hong Kong and to the millions of people who live in Hong Kong.” 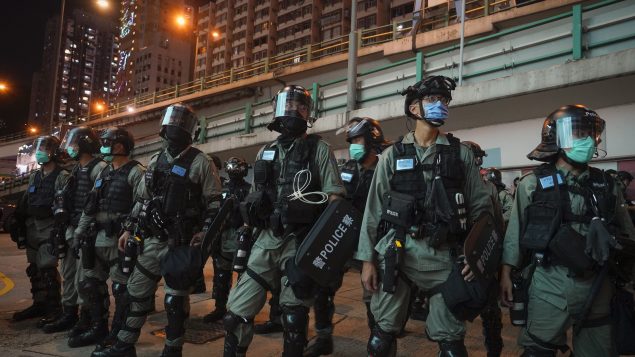 Riot police stand guard after pushing back protesters demonstrating against the new security law during the anniversary of the Hong Kong handover from Britain, Wednesday, July. 1, 2020, in Hong Kong. Hong Kong police have made their first arrests under a new national security law imposed by mainland China. The law, which took effect Tuesday night, makes activities deemed subversive or secessionist punishable by up to life in prison. (Vincent Yu/AP Photo)

Foreign Affairs Minister Francois-Philippe Champagne said Canada joins the international community “in reiterating its serious concern” at the passage of national security legislation for Hong Kong by the Standing Committee of the National People’s Congress of China.

“This legislation was enacted in a secretive process, without the participation of Hong Kong’s legislature, judiciary or people, and in violation of international obligations,” Champagne said.

“This process demonstrated disregard for Hong Kong’s Basic Law and the high degree of autonomy promised for Hong Kong under the ‘one country, two systems’ framework.”

Hong Kong’s role as a global hub was built on that foundation, Champagne said. Without it, Canada is forced to reassess existing arrangements, he added.

Canada also joined 26 countries at the UN’s Human Rights Council on Tuesday to express “deep and growing concerns” regarding China’s treatment of the Uighur and other Muslim minority groups in Xinjiang and Beijing’s national security law targeting dissent in Hong Kong.

In response to the statement, a spokesperson for the Chinese embassy in Canada accused Ottawa of “irresponsible remarks.” 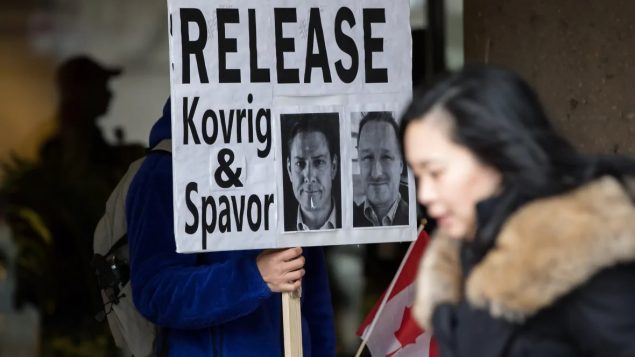 A young man holds a sign bearing photographs of Michael Kovrig and Michael Spavor outside B.C. Supreme Court in Vancouver, where Huawei chief financial officer Meng Wanzhou was attending a hearing, on January 21, 2020. The two Canadians were arrested in China immediately after Meng’s detention in Canada in what is widely seen as a reprisal. They are held in Chinese jails in what is described as very difficult conditions. (Darryl Dyck/The Canadian Press)

Canada and China have been locked in a bruising diplomatic row over the arrest in Vancouver of Huawei chief financial officer Meng Wanzhou, who’s wanted by U.S. authorities on charges of fraud, and Beijing’s retaliatory arrest of former Canadian diplomat Michael Kovrig and Michael Spavor, who’ve languished in Chinese jails since December of 2018.

China is demanding an immediate end to the extradition proceedings against Meng, who’s been living under house arrest in one of her luxury mansions in Vancouver.

Beijing has also stepped up economic pressure on Canada by ending exports of Canadian canola and creating barriers for exports of other Canadian commodities.