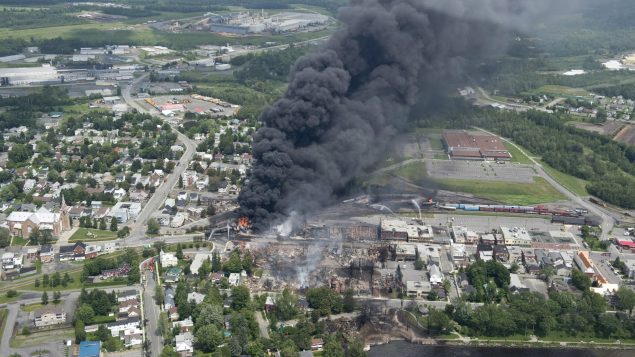 A small town in Quebec, Lac-Mégantic, marked the seventh anniversary of the 2013 rail disaster by inaugurating a memorial space.

On July 6, 2013, an unmanned train carrying tanker cars containing crude oil, derailed and exploded in the centre of Lac-Mégatic, killing 47 people and destroying a large portion of the downtown area.

The memorial will be on the old site of Musi-Café, which is where many of the victims were gathered on the night of the tragedy.

The memorial was conceptualized by Pierre Thibault and Jérôme Lapierre with the objective of allowing everyone to remember the events in their own way according to a press release from the town from last week.

The town also announced that they got written confirmation from the Canadian Pacific Railway that no trains would run on Lac-Mégantic’ rails throughout the day.

Last week, Lac-Mégantic Mayor Julie Morin said it is the least they can do for the citizens who continue to watch trains pass in the heart of the city. She added that the city wants to renew this agreement in perpetuity even after the new rail track that will bypass Lac-Mégantic is completed and the rails in the town’s downtown area are dismantled.

Canadian Prime Minister Justin Trudeau paid tribute to those who lost their lives in the tragedy in a statement today.

“On this solemn anniversary, we offer our deepest sympathies to the families and loved ones left behind, and our support to everyone still living with the pain and trauma from that tragic night,” Trudeau said in a press release. “We also salute the courage and selflessness of the first responders, whose actions – and the support they offered to so many families in a time of great need – will never be forgotten.”

The inauguration was broadcasted on Lac-Mégantic’s Facebook page due to physical distancing measures caused by the COVID-19 pandemic.