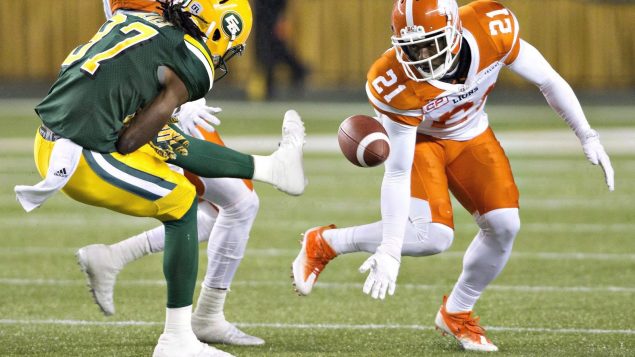 B.C. Lions' Ryan Phillips (21) and Edmonton Eskimos' Kenny Ladler (37) try to scoop up the loose ball during second half CFL action in Edmonton, Alta., on Friday, September 23, 2016. The Edmonton Eskimos responded to the new calls to change its name. (The Canadian Press/Jason Franson)

The Canadian Football League’s (CFL) Edmonton Eskimos has responded to the new calls to change its nickname by saying that it will increase its engagement with Inuit communities, according to a tweet from the team on July 3.

The tweet came on Friday afternoon, shortly after the National Football League’s Washington team announced that they would review their team nickname, which is an Indigenous slur.

“We recognize that there has been increased attention to the name recently and we will ramp up our ongoing engagement with the Inuit communities to assess their views,” the Edmonton Eskimo’s said in a statement on Twitter.

In 2015, Natan Obed, the president of the Inuit Tapiriit Kanatami, Canada’s national Inuit organization, raised concerns about the team name and said that the term eskimo is outdated, derogatory and a vestige of colonialism.

The Edmonton Eskimos had done an year long research and engagement program with Inuit leaders and community leaders in Iqaluit, Inuvik, Yellowknife and Ottawa about the clubs name.

However, in February of this year, the team concluded that “no consensus emerged to support a name change,” and that it would keep the team nickname.

Janice Agrios, the chair of the board of directors, said in a statement at the time that the engagement program had provided the club with many insights, and that the club would continue to engage with Inuit leaders and community members to strengthen the ties between the team and the Inuit community.