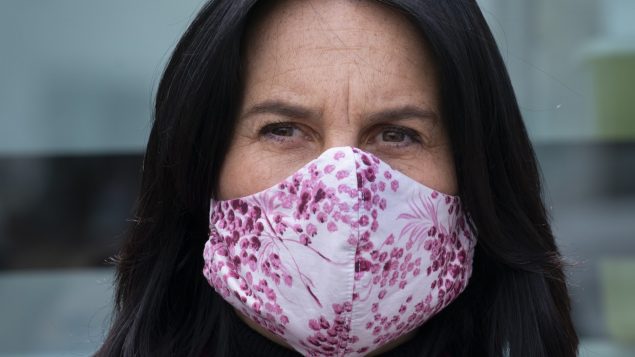 Montreal Mayor Valerie Plante wears a protective mask during a news conference in Montreal on May 5, 2020. Plante is looking to implement a bylaw that will make masks and face coverings mandatory in public enclosed spaces starting on July 27. (The Canadian Press/Paul Chiasson)

Montreal Mayor Valerie Plante is looking to implement a bylaw that will make masks and face coverings mandatory in public enclosed spaces starting on July 27, according to a post she made on social media.

“Over the past few days, we have witnessed the emergence of some outbreaks in the suburbs of Montréal, which could undermine the efforts we have been making since the beginning of this pandemic,” Plante wrote in a Facebook post on Monday. “I want to be clear: we must do everything we can to protect ourselves.”

Since the economy began reopening, Plante said that many of the merchants have pointed out the daily challenges of ensuring that social distancing and hygiene measures are being respected within their business. She added that a rise in new COVID-19 cases could be a disaster for human lives and the economy.

Plante said that the city will draw on experiences from other Canadian cities that have adopted similar bylaws, as well as allow for an adjustment period for everyone in the city to get ready for the new bylaw.

The leader of opposition party Ensemble Montreal, Lionel Perez told CBC News that it is the right decision for the city to mandate masks, but it comes at the wrong time. He believes that the city should have adopted a measure when the economy began reopening.

In Quebec, masks will be required on public transit starting on July 13, and a Montreal suburb, Côte Saint-Luc, have mandated masks and face coverings in indoor spaces since July 1.

With files from CBC News and Isaac Olson