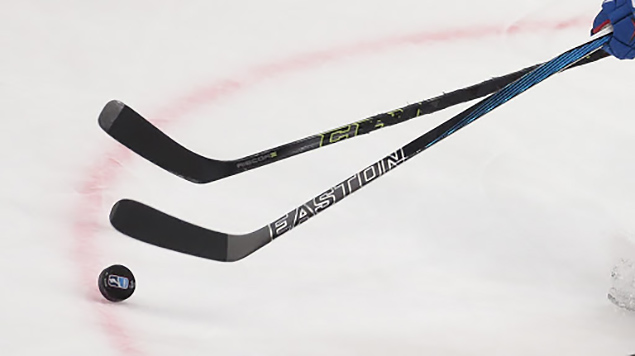 Players vie for control of the puck during the Ice Hockey World Championships Group A match between Russia and Denmark, in Moscow, Russia, on Thursday, May 12, 2016. A Junior B hockey team on Vancouver Island is changing its name in a show of respect to First Nations. The owners of the Saanich Junior Braves say a process has been started to develop a name that upholds the team's core values. (The Canadian Press/AP/Ivan Sekretarev)

The owners of the Saanich Junior Braves, a hockey team in British Columbia, announced plans to change the name and logo of the team out of respect to Indigenous communities, according to a press release on Wednesday.

“The Saanich Junior Braves name is not respectful to our First Nations and does not reflect the valued relationships we hold with local First Nations communities or with our First Nations players,” Edward Geric and Norm Kelly, the team owners said in a statement. “We have decided to rename the team and have started a process to develop a name that upholds our core values.”

The team had been using the name and logo since 1967 when it joined the Vancouver Island Junior League. According to a statement from the team, more details on the renaming process will be announced in the coming weeks.

The name change comes amidst numerous calls for sports teams to change their names due to their offending nature. The Edmonton Eskimos, a team in the Canadian Football League, is reviewing the team name after they were called out by some of their sponsors.

In the United States, the National Football League’s Washington team, who’s team nickname is an Indigenous slur, recently announced they would review their name.

In an interview with CBC’s All Points West, Kelly said that the decision to change the name was not due to any controversy.

“I’ve never had anyone come up and say they were upset or disgusted,” Kelly said. “But we feel like we want to be leaders rather than followers.”

Until a new name and logo are decided upon, the team will be known as the Saanich Junior B Hockey.

With files from CBC News, Roshini Nair, and All Points West