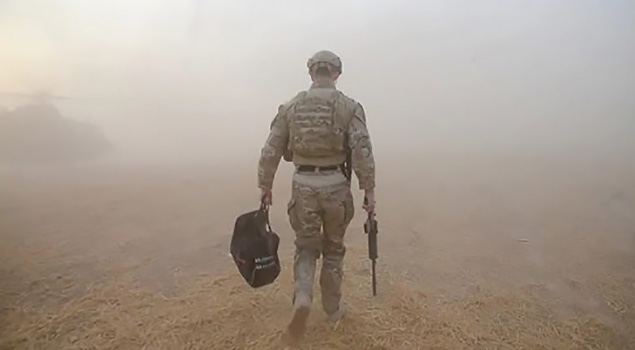 A Canadian Forces soldier walks towards a Griffon helicopter near Erbil in northern Iraq in 2016. (Murray Brewster/CBC)

All Canadian soldiers stationed in northern Iraq are safe and accounted for following Wednesday’s missile attack on the base they share with U.S. troops near the regional capital of Erbil, Canadian officials said Thursday.

Six rockets landed near Erbil International Airport in the semi-autonomous Kurdistan Region on Wednesday, according to a statement released by the Ministry of Interior of the Kurdistan Regional Government (KRG).

The rockets were launched from the borders of the Sheikh Amir village in Nineveh province by the Popular Mobilization Forces (PMF) who were targeting coalition forces, the KRG counterterrorism service said.

The PMF are an umbrella group composed of mostly Iran-backed Iraqi Shiite militias that is part of Iraq’s armed forces.

The missile attack came amid simmering tensions between Washington and Iran-backed Shia militias that want the Americans to leave Iraq.

According to the statement, the missiles were intercepted and did not cause any major damage.

“The recent attacks on a ‎military base in Erbil did not affect coalition forces,” said a statement by the Canadian Armed Forces (CAF). “All CAF members are safe and accounted for and we continue to monitor the situation closely with our allies and partners in the region.”

Canada is part of the anti-ISIS coalition and has nearly 850 troops stationed in the region as part of Operation IMPACT, Ottawa’s military contribution to the multinational efforts to defeat the so-called Islamic State in the Middle East.

Canada is also taking part in the NATO Training Mission in Iraq.

“Canada remains committed to Operation IMPACT in the Middle East and the NATO Training Mission,” Defence Minister Harjit Sajjan said in a statement.

“The safety and security of our troops is our top priority, and all women and men are accounted for. We are aware of the recent events in Iraq and we are watching for security threats very closely.”