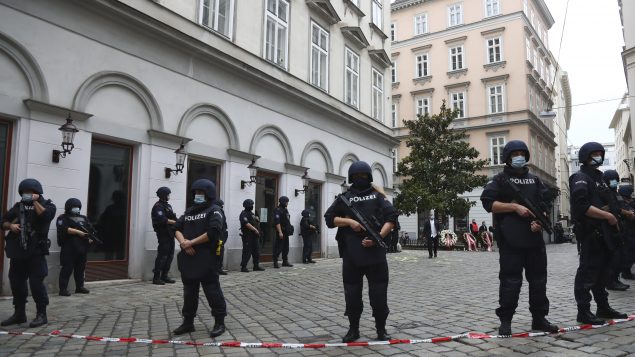 Prime Minister Justin Trudeau has added his voice to a chorus of world leaders condemning Monday’s terrorist attack in the Austrian capital of Vienna that killed four people and injured 21 others.

The attack began shortly after 8 p.m. near Vienna’s main synagogue as many people were enjoying a last night of open restaurants and bars before a month-long coronavirus lockdown, which started at midnight.

Speaking at a press conference in Ottawa, Trudeau offered his condolences to the victims and all those grieving.

“We stand by the people of Austria and Jewish communities around the world, who are reeling from this attack,” said Tuesday.

“There have been too many of these unacceptable acts of terrorism and violence in our world recently, including in France over the last few weeks, and at Kabul University in Afghanistan yesterday.”

Canada stands united with people everywhere in the world in condemning these “terrible” attacks, Trudeau said.

Today’s shooting in Vienna is horrific and heartbreaking. We condemn in the strongest terms possible this act of terrorism. Our thoughts are with the people of Austria and everyone affected by this deplorable act.

Champagne tweeted that he was in contact with Austrian Foreign Affairs Minister Alexander Schallenberg.

“I offered my sincere condolences on behalf of all of Canada,” Champagne wrote. “Our thoughts are with the families and loved ones of the victims.”

Canada is shocked by the tragic attack in #Vienna. A senseless act of terrible violence.

I was in contact with my counterpart #Schallenberg, @MFA_Austria. I offered my sincere condolences on behalf of all 🇨🇦. Our thoughts are with the families and loved ones of the victims.

The attacker, a man who had previously tried to join the Islamic State group rampaged in Vienna armed with an automatic rifle and a fake explosive vest, before he was killed by police, Austrian authorities said Tuesday.

The suspect was identified as Kujtim Fejzulai, a 20-year-old Austrian-North Macedonian dual citizen with a previous terror conviction for attempting to join the Islamic State group in Syria. Police searched 18 properties as well as the suspect’s apartment, detaining 14 people associated with the assailant who are being questioned, Interior Minister Karl Nehammer said.

Initial reports had suggested that there might have been several attackers, however, Nehammer said investigators have found “no indication of a second perpetrator.”

Fejzulai was sentenced to 22 months in prison in April 2019 but was granted early release in December.

“The fact is that the terrorist managed to deceive the judicial system’s deradicalization program to secure his release,” Nehammer said, adding that the system should be reevaluated.

He also said that an attempt to strip the suspect of his Austrian citizenship had failed for lack of enough evidence. In North Macedonia, Interior Ministry spokesman Toni Angelovski said authorities there would cooperate with Austrian police.

‘An attack out of hatred’ 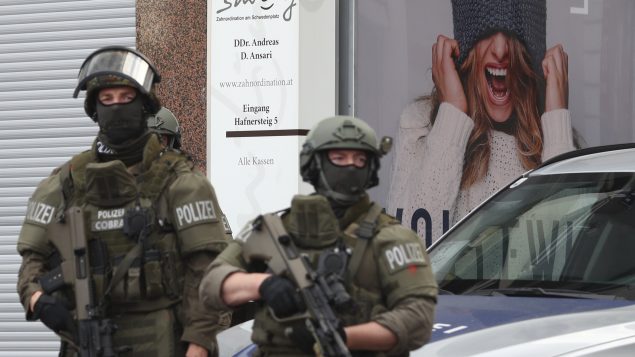 Police officers guard the scene in front of an advertising board in Vienna, Austria, Tuesday, Nov. 3, 2020. (Matthias Schrader/AP Photo)

“Yesterday’s attack was clearly an Islamist terror attack,” Chancellor Sebastian Kurz said. “It was an attack out of hatred — hatred for our fundamental values, hatred for our way of life, hatred for our democracy in which all people have equal rights and dignity.”

The attack in Vienna came on the heels of three terror attacks in France in recent weeks blamed on Islamist extremists: the wounding of two people outside satirical newspaper Charlie Hebdo’s old headquarters; the beheading of a schoolteacher who showed students caricatures of the Prophet Muhammad; and a deadly knife attack Thursday in a church in the Mediterranean city of Nice.

French President Emmanuel Macron tweeted that the French “share the shock and grief of the Austrian people hit by an attack tonight.”

“After France, this is a friendly country that has been attacked. This is our Europe. … We will not give in,” he wrote.

President Donald Trump tweeted American support for Austria in fighting terrorism. “Our prayers are with the people of Vienna after yet another vile act of terrorism in Europe. These evil attacks against innocent people must stop,” he wrote.