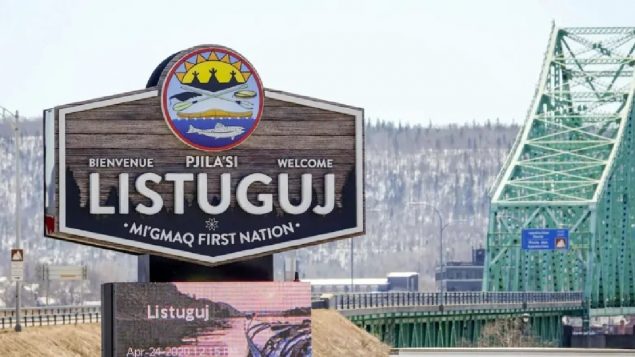 Students from Listuguj First Nation reserve in Quebec normally attend Sugarloaf High School across the bridge in New Brunswick, They have been told that under emergency COVID rules they're no longer allowed in, though teachers can cross. (Isabelle Larose- Radio-Canada)

To protect its residents from outside COVID infections, New Brunswick had joined with other maritime provinces to create a so-called ‘bubble’ earlier this year. This involved not allowing anyone from outside the province, or the maritime bubble, to enter.

That was relaxed as COVID cases were reduced but restrictions were returned in an emergency order on Oct 22, prohibiting non-essential  travel into the province. However, the order made an exemption for the First Nations reserve of Listuguj Quebec which is just across the water in Chaleur Bay from Campbellton, New Brunswick. Many of the young members of Listuguj attend school at Campbellton, and had been permitted to cross into the province.

Then the Deputy Minister of Education in new Brunswick called the Listuguj chief to advise that the 100 or so Indigenous high school students were no longer allowed in.

The Canadian Civil Liberties Association (CCLA) has sent a letter to the New Brunswick Minister of Justice saying the ban violates the  Constitution section on ‘mobility rights’, but also that the ban violates the province’s own law which stated the students had an examption

The CCLA pointed out that while teachers from Listuguj and Point-a-la-Croix, Quebec are allowed to cross, the students they teach are not.

The CCLA hints that this singling out of Indigenous students could be perceived as racial discrimination which would violate other sections of the Constitution.

Michael Bryant of the CCLA quoted by the CBC said, “nothing trumps the Constitution”  The CCLA said if a reversal is not done, legal action may follow.

The City of Campbellton has subsequently passed a unanimous motion calling for education to be deemed an essential service with councilor, Gilbert Cyr, saying Campbellton, “stands behind the fair and equitable treatment of all the youth and students in our area, and in this case in particular, our students from Listuguj.”