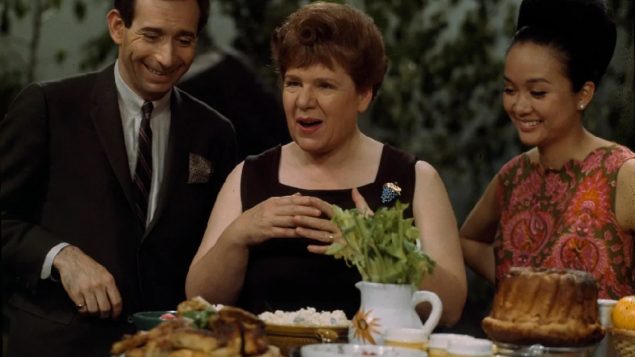 The story of cooking legend Julia Child once a household kitchen name, has been revived  and her legend increased thanks to the 2009 hit movie Julie and Julia starring Meryl Streep.

However equally famous if not more so in Canadian kitchens is the name Madame Benoit, a woman whose path resembles closely that of Julia Child.

Mme Jehane Benoit died on this date after a long career as a culinary author of dozens of cook books, journalist, commentator, and contributor to TV , where her accented English became sort of trademark in the English language version appearances on Take 30 She was also a sought after speaker, and all of this in Canada’s two official languages.

Mme Benoit with Rod Coneybeare (pupeteer and voice of Jerome and Rusty  on The Friendly Giant )  JB: “Cooking is half imagination…RC: Well I thought you had to measure all these things…. JB  “Ahh no… (CBC Archives  1969)

Generations of Canadians were inspired to cooking and trying new recipes thanks to Mme Benoit, who not only taught Canadian recipes, but also more exotic ones from Africa, the Mediterranean, or Caribbean.. She also made great efforts to share Canadian recipes with Canadians, including some offbeat ones like “squirrel in white wine”. 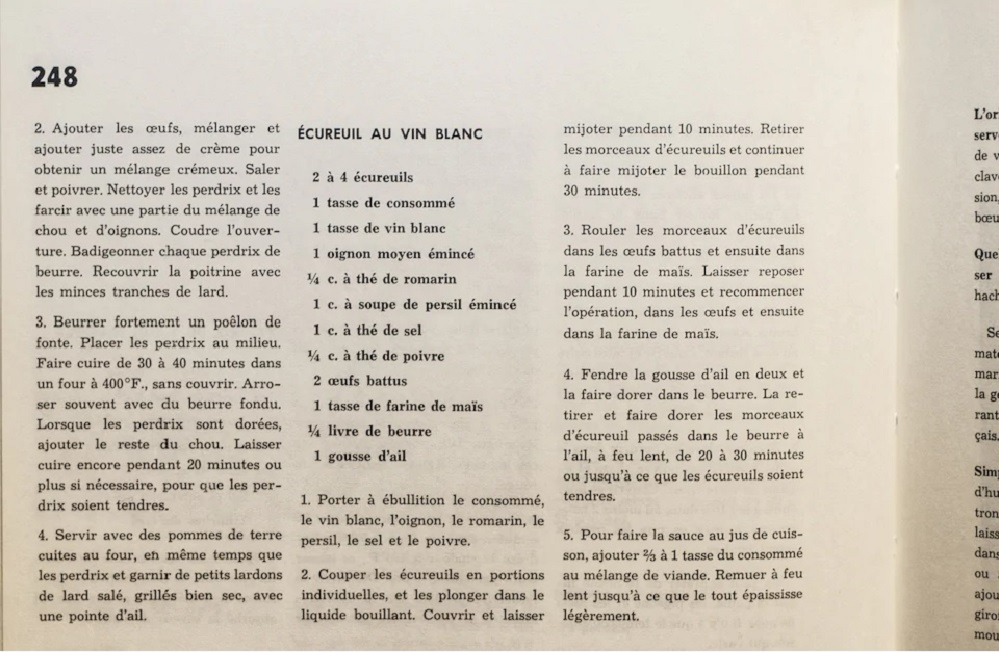 Squirrel in White Wine from the French edition of The Encyclopedia of Canadian Cuisine” by Jehane Benoit,
-start with 2 to 4 squirrels- (Les Messageries du Saint-Laurent, 1963 ,photo Radio Canada)

Born Jehanne Patenaude, she travelled to France and studied at the Cordon Bleu cooking school, the same place Julia Child had to conquer, but even more, she graduated as a food chemist from the Sorbonne. Asked to stay on, she said she wanted to revolutionize cooking in Canada and the soon to be culinary legend later returned home where she opened her own cooking school in Montreal and from 1935-40 was a pioneer when she ran The Salad Bar, a restaurant focused on vegetarian cuisine long before the idea of vegetarian eating became popular.

She would go on to write dozens of cook books and the “encyclopedia of mircrowave cooking and through the 50-s to the 70’s probably most homes in Canada contained at least one Mme Benoit cook books. There are probably still hundreds of thousands of examples of her books still in homes across the country.

In 1973 she was nominated to the Order of Canada for her work in promoting Canadian cuisine and the ‘art’ of cooking.

There has been no-one since like “Mme Benoit” who died on this date in Sutton, Quebec at age 83.

As an article by Julian Armstrong in the Montreal Gazette said in 2012, “Cookbook author and TV chef Jehane Benoit spent her career trying to convey how easy it is to cook and how rich Canada is in culinary traditions”.