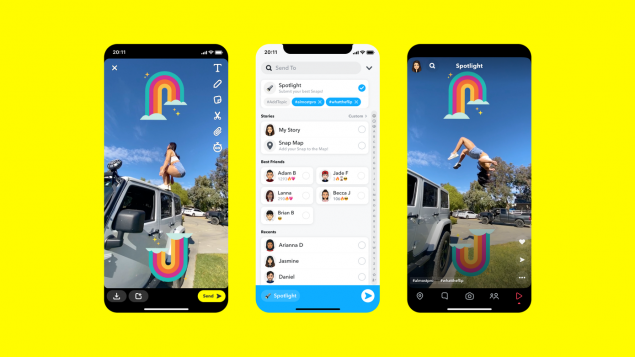 Snapchat used to be the favorite of young social media users, but under the dual competitive pressure of Instagram and TikTok, it has lost its momentum.

After a quiet year of lacking innovation, Snapchat finally began to fight back. On the morning of Nov. 23, Snapchat officially announced the launch of a dedicated place within its App, where users can watch short videos on a vertical scrollable screen similar to TikTok feed. This new feature, called Spotlight, will showcase the most watched short videos created by the user community.

In a brief news release, Snapchat says to encourage the creation of short videos it would distribute more than $1 million a day among the best Spotlight short video creators.

At this moment, Spotlight is available in the United States, Canada, Australia, New Zealand, Britain, Ireland, Norway, Sweden, Denmark, Germany and France.
Snapchat says it’s still working on its new short video function. Spotlight short videos still need to be reviewed and there is no comment function for them so far.