A man embraces the walls of his home before abandoning it as fear of Azeri persecution prompts him to leave his homeland on Nov. 12, 2020 in Karvachar, Nagorno-Karabakh. Ethnic Armenians living in the Karvachar district of the disputed territory Nagorno-Karabakh said goodbye to their homes after the land had been ceded by Armenia back to Azerbaijan as per a peace agreement made between the two countries on Nov. 9, 2020. (Alex McBride/Getty Images)

The Nagorno-Karabakh Knot – Episode 5: Between war and peace

The crushing defeat suffered by the Armenian forces in Nagorno-Karabakh at the hands of the Azerbaijani military backed by Turkey and an assortment of Syrian and Libyan mercenaries has caused a cascade of political, diplomatic, security and humanitarian crises in Armenia and in Nagorno-Karabakh.

Literally overnight, tables were turned and Armenians, who had emerged victorious in the 1990s, during the First Karabakh War, had to accept a humiliating ceasefire to cut their losses. 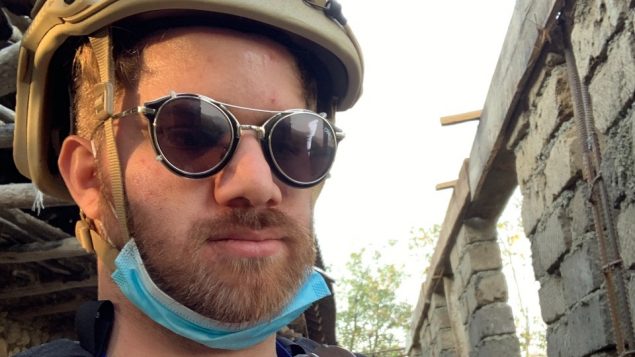 (Canadian-Armenian journalist Raffi Elliott is pictured in this photo taken on Nov. 2 in the Armenian village of David Bek, which had been repeatedly shelled by the Azerbaijani military during the latest war. Photo courtesy of Raffi Elliott)

Radio Canada International spoke about the challenges facing Armenia and what remains of the Armenian-populated breakaway region of Nagorno-Karabakh, now protected by about 2,000 Russian peacekeepers, with Raffi Elliott. He is a Canadian-Armenian journalist and entrepreneur based in Yerevan, Armenia. We also spoke about the prospects of peace between Armenians and Azerbaijanis.