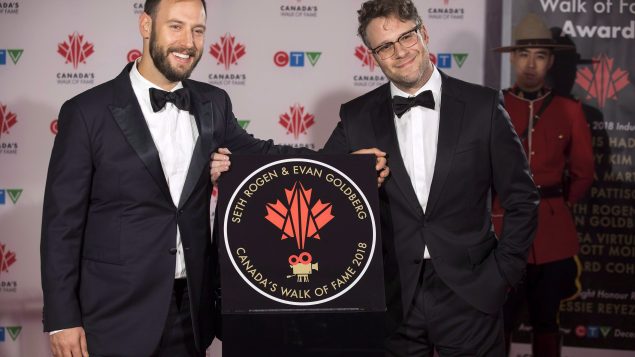 Seth Rogan, right, and his long-time friend Evan Goldberg stand by their star as they are inducted into the 2018 Canada Walk of Fame during a press red carpet event in Toronto on Dec, 1, 2018. (THE CANADIAN PRESS/Chris Young)

Rogen says the book, entitled called Yearbook, is a collection of true stories that he hopes are funny–at worst–and–“life changingly” amazing–at best.

“I talk about my grandparents, doing stand-up comedy as a teenager, bar mitzvahs, and Jewish summer camp, and tell way more stories about doing drugs than my mother would like,” Rogen writes

“I also talk about some of my adventures in Los Angeles and surely say things about other famous people that will create a wildly awkward conversation for me at a party one day.”

I wrote a book called Yearbook. It’s true stories and essays and stuff that I hope you think are funny. It comes out in May, but if you like you can order it now. Yay! https://t.co/Cqwwi4qq3o pic.twitter.com/nDxwBqnkp8

The book will be published by Crown, an imprint of Penguin Random House, and is set to be released on May 11.