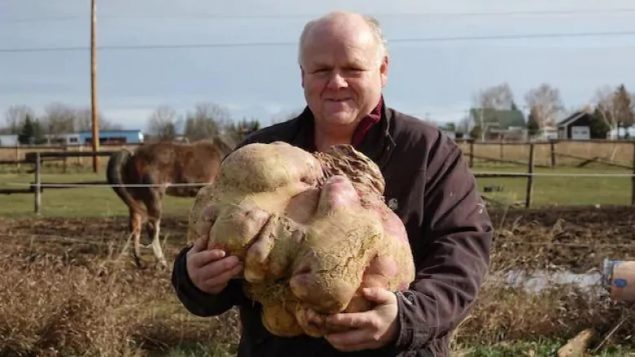 Damien Allard poses with his world-record turnip that weighed 29 kilograms, had a circumference of 138 centimeters, a height of 35 centimeters and a width of 46 centimeters. Its size eclipsed a turnip record that had stood since 2004. (Radio-Canada/Isabelle Larose)

‘Did ya hear about that guy in Quebec who produced the biggest turnip ever?’

As Damien Allard prepared to pull the turnip he’d had been nursing since spring out of the ground near his home on Quebec’s gorgeous Gaspé Peninsula early last November, his hopes were high.

His heart was set on getting the turnip into the Guinness Book of Records, now officially known as Guinness World Records.

Going in, Allard, a former forest engineer and now a professional cabinet maker, knew what he needed. 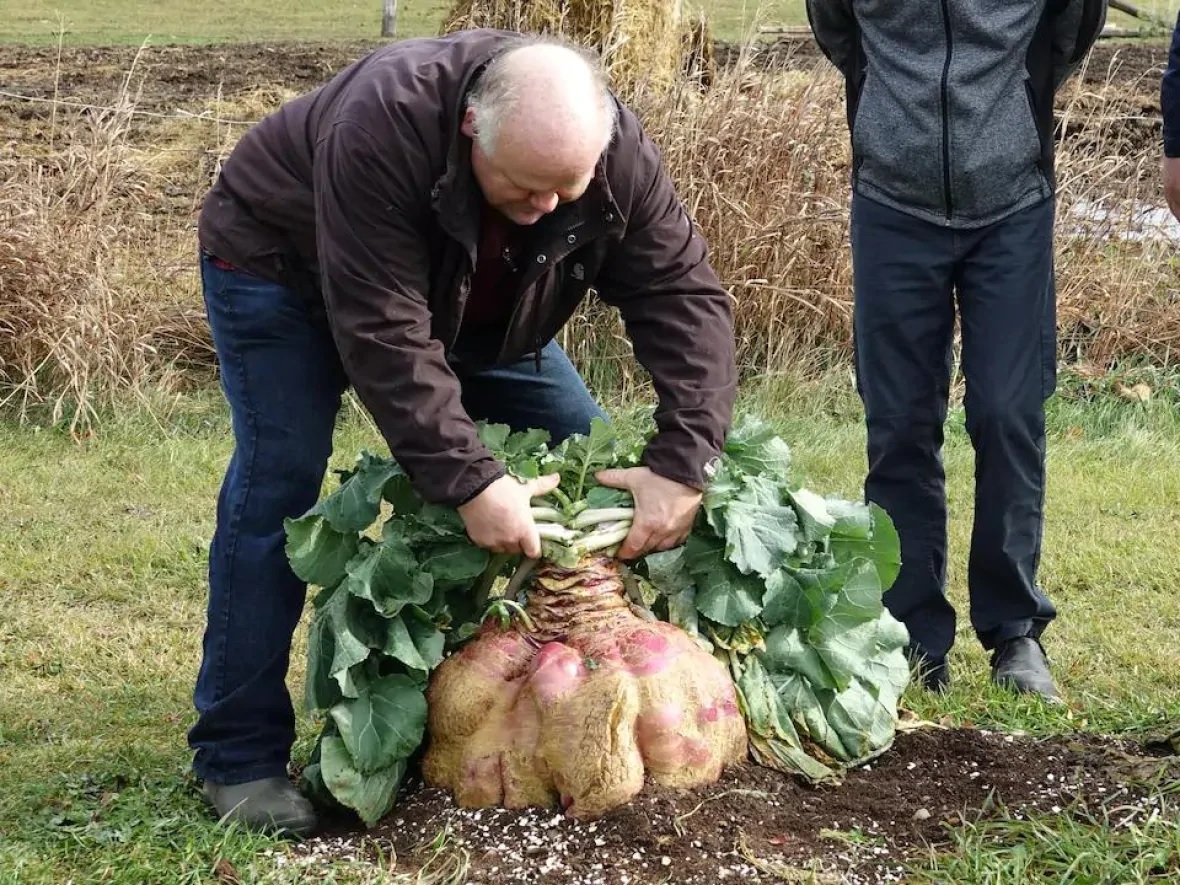 Damien Allard has had his eyes on the prize since 2016. (Radio-Canada/Isabelle Larose)

As per Guinness rules, two official witnesses needed to watch–to make sure there was no cheating as Allard took a shot to set the world record for the biggest turnip that ever lived.

Two cameras were rolling–the better to forward documentation to the Guinness people.

What everybody knew was that Allard’s turnip had to be bigger than the turnip that came to air in Alaska in 2004–the one currently holding the world record:  17.7 kilograms.

When The Moment of Truth arrived: 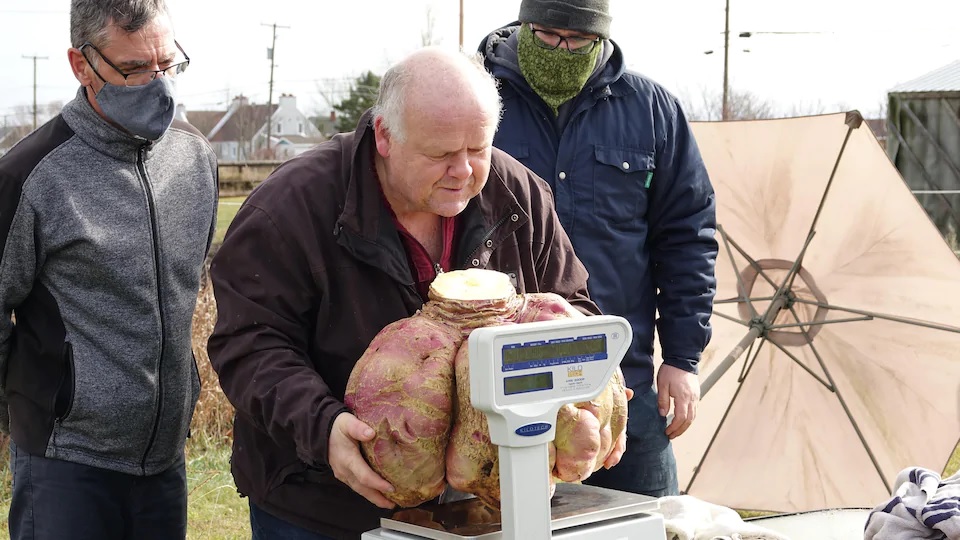 “There are eight billion of us on Earth. I’m the only one who managed to make a big turnip like that,” Allard told Radio-Canada’s Isabelle Larose.

For good measure, Allard then pulled two other turnips from the earth.

In sports that’s called a blowout.

“It’s been two years that I have been working quite intensely on my turnips.

“I suspected very strongly that this year was the right one, but I never thought I would have been more than 10 kilos above the old record.”

Arrangements were made to send the needed documentation to Guinness.

“I think I followed the procedure as best I could,” Allard said.

“The two witnesses must write a letter to prove what they saw. I will be sending pictures and videos to Guinness and should hear back within a few months.”

“Officially, they’re big, but the turnips are not yet Guinness-approved.” 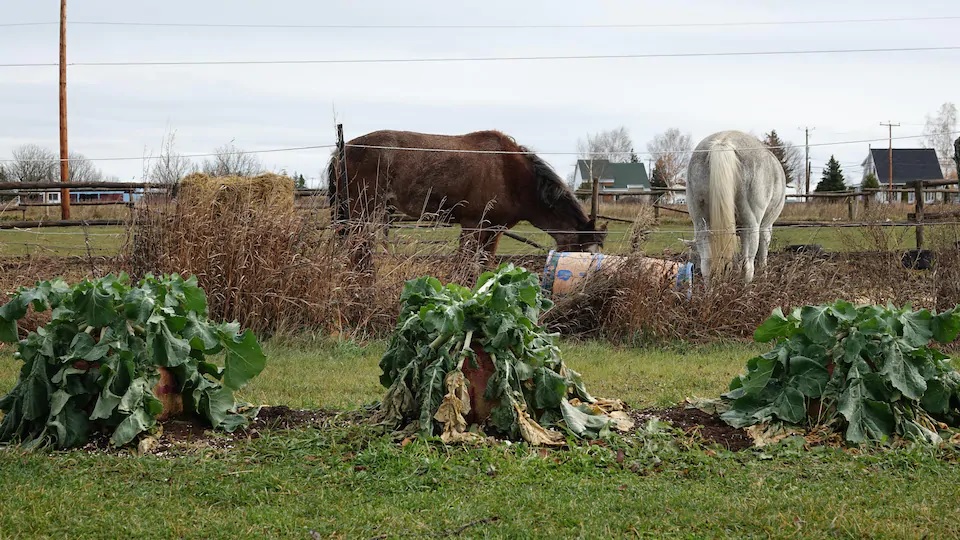 Asked what he was going to do with his crop of giant turnips, Allard replied he’d be making “turnip cream in industrial quantities.” (Radio Canada/Isabelle Larose)

On Wednesday, Allard got what he was shooting for.

He and his and his wife received confirmation from the Guinness World Records management team.

Allard’s turnip was in The Book.

The turnip seeds, bought at the local hardware store, were planted very early in the spring, in potting soil enriched with urea and 400 liters of compost.

Even the acidity of the soil, Allard told Larose, was not left to chance.

“I sheltered my plants in the spring because it froze hard the first few nights,” Allard said.

“I watered them all summer, just about every non-rainy day, with soluble fertilizer.

“This summer, on a good day, the circumference of turnips increased by one to two centimeters a day.”

A quest that began in 2016 when he dug up a seven-kilogram turnip and decided to check the world record is over for Allard, who fell just short of the existing record in 2018 when he grew a 15.5 km turnip.

The official certificate from Guinness is due in the coming weeks.

Will Allard be celebrating?

In November he told Larose he planned to make “turnip cream in industrial quantities.”

He also issued a challenge to his neighbours.

“I am inviting all Gaspésiens to try to top the record next year,” he said