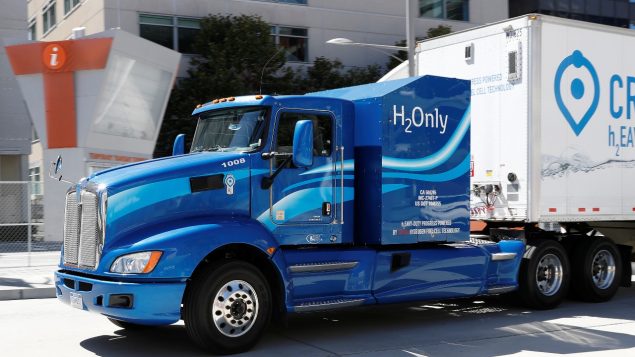 Researchers in Quebec are looking to develop ways for using a renewable byproduct of Canada’s pulp and paper industry as one of the main components for the production of hydrogen fuel cells.

The research led by Samaneh Shahgaldi, the newly appointed Canada Research Chair in Lignin-Based Fuel Cells at the University of Trois-Rivieres in Quebec, looks at replacing petroleum-based carbon components inside fuel cells with bio-based materials that are abundant in nature, cleaner and cheaper.

One of these materials is lignin, Shahgaldi told Radio Canada International.

“Lignin is an inexpensive, highly accessible, renewable source for production of carbon materials,” Shahgaldi said. “It’s the second most abundant polymer in the world.”

More than 150 billion tonnes of lignin are produced by plants each year and 1.5-1.8 billion tonnes by the pulp and paper and forestry industries, she said.

Shahgaldi’s research focuses on a type of fuel cells known as proton exchange membrane (PEM) fuel cells, which are being developed mainly for transport and stationary applications. Fuel cells use hydrogen and air to create electricity through an electrochemical reaction. 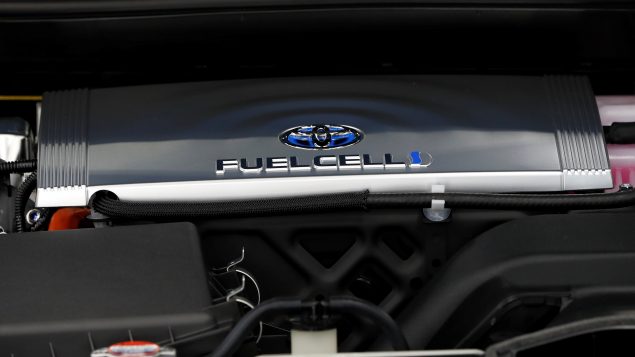 A logo is seen on a unit of Toyota Motor Corp.’s Mirai fuel cell vehicle (FCV) at the company’s Motomachi plant in Toyota, Aichi prefecture, Japan May 17, 2018. (Issei Kato/REUTERS)

The core component of a fuel cell is a device called membrane electrode assembly (MEA). It helps produce the electrochemical reaction needed to separate electrons. On the anode side of the MEA, hydrogen diffuses through the membrane and is met on the cathode end by an oxidant (oxygen or air) which bonds with the fuel and receives the electrons that were separated from the fuel.

Then catalysts on each side enable reactions and the membrane allows protons to pass through while keeping the gases separate to maintain cell potential and drawing current from the cell producing electricity.

And after nearly three decades of intensive research, PEM fuel cells have reached the early stage of commercial deployment, Shahgaldi said. But the remaining challenges include the need to lower production costs, she added. 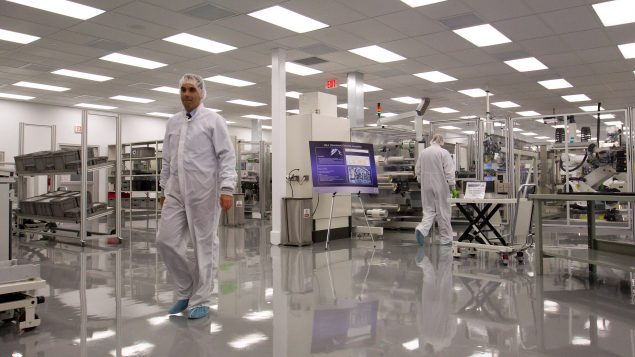 Gudio Opinc, left, Manager of Production and Planning, walks through a new Mercedes-Benz facility dedicated to the production and technology development of fuel cell stacks during it’s grand opening in Burnaby, B.C., on Thursday, June 21, 2012. The hydrogen fuel cells produced at the facility will be used in the company’s fleet of hydrogen powered vehicles. (Darryl Dyck/THE CANADIAN PRESS)

Shahgaldi said she wants to replace the fuel cell carbon made with petrochemicals with carbon made of lignin.

“In terms of cost, lignin is more than 10 times cheaper than petroleum-based poly acrylonitrile,” Shahgaldi said.

“If we use fuel cells in our engines – in our cars, buses, trucks and trains – we don’t have any contamination,” she said. “We don’t have any poisonous gases, the only byproduct that we have is pure water that is hundred times cleaner than the tap water.”

Fuel cells are already being used by companies such as Toyota and Alstom to power their vehicles and trains. And British Columbia-based Ballard Power Systems is a major manufacturer of fuel cell engines.

“I remember when I started fuel cell research in 2008, we just talked about a couple years more, a couple of years more,” Shahgaldi said. “But I can confidently tell you that we’re in the year that we can see it.”