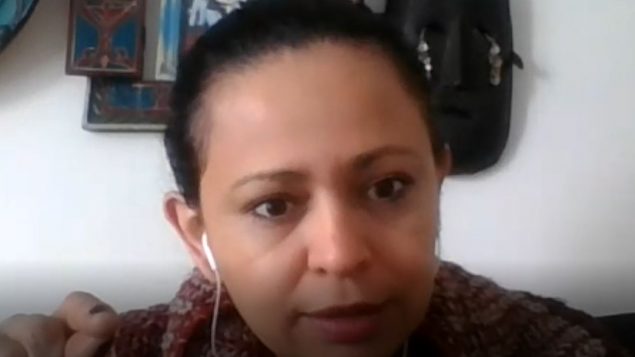 When I came to Canada, the last thing I would have imagined was the way the police would treat us here. For me, that was a surprise. It was a wake-up call. We would always leave school as a group, as there were many new arrivals from El Salvador because of the war. That high school was full of newly arrived Salvadorans, like me. And obviously, collectively, because of all the trauma of the war that we hadn’t even processed psychologically, we tended to seek each other out.

I missed the Salvadoran accent, that black humour that characterizes us. Our humour is very peculiar. So I missed that. That need, that thirst, that sadness perhaps that I felt for not being in El Salvador … we had a tendency to form a group, and we would walk to our homes as a group. The times when we were stopped by the police just for walking in a group are countless, there were too many.

Then in the last year of high school, a Canadian girl who was working precisely on this kind of issue came to us. People today may not understand it, but at that time there were no protests like there are today. At that time it was not like that because we did not yet have our permanent residency. We were on a special refugee visa.

The young Canadian woman was collecting stories. She, with another colleague, came up with the idea of creating a poster in the subway to talk about racism. The poster featured about three Latinos, as in very typical Latinos, I think they exaggerated the look. She called for a rally. Nobody showed up. Obviously, I went because I was already pissed off. I think that’s the best description because when you get to that point, it goes beyond your safety. You reach a point where you think and say: ‘No, this needs taking a risk, this needs to be shut down’.

We developed a project with the police. Their representative arrived. At the time it was like the maximum that could be done: a poster in the Bloor-Yonge subway station. The Toronto Star newspaper did a story on this, and they still have it in their archives. It can be found online.

If one really wants to understand the context of racism here, it is very important that we realize that Canada has historically been a country that has been founded, that works, that operates on the basis of racism. One can no longer use the excuse of saying: ‘I didn’t know such things existed in Canada.’ Now you can even ask Alexa: Alexa, is there racism in Canada? I invite people to ask Alexa, Siri or Google, and see what they answer. If we can’t figure out how we contribute to the constant colonization that goes on in this country every day, then don’t talk to me about racism. It is necessary to carry out a dedicated work to ascertain where we are living. Who was here before us?

The year my daughter was born, in 1993, was the year they closed the last residential school in this country.

Racism will not be eradicated if we don’t find out who is feeding it, who is promoting it. It won’t be eradicated unless we are able to actually raise our voices in our day-to-day activities. It can be at a Starbucks, at the grocery store, any time we raise our voice and say, ‘No, not today.’ It is important to keep up this habit and teach it to the new generations.