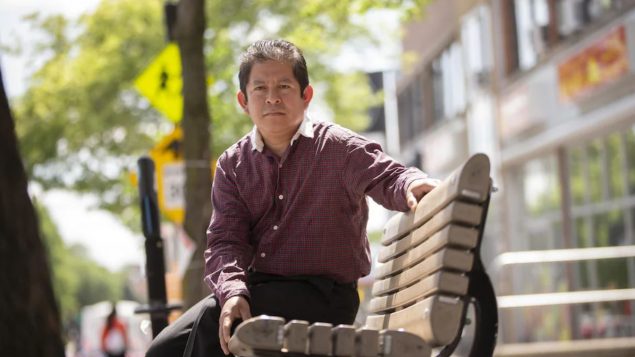 My name is Joni Ismael Velázquez Gutiérrez. I am Mexican. I came to a ferme [farm] to work in the livestock industry, in the milk industry. There, I can say that I experienced a certain degree of racism and verbal abuse from my employer, because he insulted us, he always scolded us, even if we didn’t do the things ourselves, he always drew our attention with words that were a bit too harsh: ‘Câlisse, Mexican’, ‘Shitty Guatemalan’, ‘You’re not in Mexico, you’re not in Guatemala. You are in Canada.’ There was a time when he didn’t pay us for a month. We were eating rice with salt, me and my companion.

On one occasion, the only time he took me to buy (food in town), on the second month of the pandemic, he took me in the trunk of the car because, he told me, we couldn’t go three in the car. He was over speeding and in the snow. Sometimes I had to walk to cash my check so I could send it to my family, or to buy water, because the water we drank was rusty, it was red.

The facilities in the house were not ideal. The windows were broken. The floor was broken. The front door, when it snowed like now, the snow would get in. The heating was old-fashioned. We had to put wood in a stove to heat the house. It would then become filled with smoke, and when the firewood got wet because of the snow, we could not heat ourselves. So I think it was racism for treating us that way.

When I met him (the employer), he told me ‘I don’t want you to speak English’, because I told him that I spoke English. He said, ‘speak Spanish since I understand a little Spanish, or French’. I told him that I don’t speak French.

I had some friends that I met at the airport. They asked me about a month later: ‘How are you doing?’ I told them: ‘You know, I am not feeling well because sometimes I don’t have enough to eat, I don’t have enough to send money to my family, we are in the cold season, it is cold, we are invaded by rats, the house is broken, the work facilities are terrible, the animals are terrible, sick and injured.’

He told me: ‘I can put you in touch with someone who can help you.’ So they gave me the contact of the IWC [Immigrant Workers Centre] and they thank God, guided me, helped me and came directly to take me out, as if they had kidnapped me at seven o’clock at night and brought me to Montréal.

When I came to Canada, I arrived filled with excitement, with lots of hope. Just like all Latin people who come to work, because that’s why we come: we come to work. As I said, as long as they pay me, I work anywhere. I work twelve hours a day.

I worked seven days a week and I had the feeling that my pay did not arrive on time. It was neither on time nor complete, as sometimes it took a month to pay us. I am still in the fermes [farms]. I like the countryside, I am a rancher, you could say, I don’t have cattle but I consider myself that way because I like cattle.

Right now I am working on a buffalo farm. It is a new experience, it is very nice. The animals are more aggressive, but you have to know how to handle them and be successful in your work.