More than a dozen Canadian Coast Guard officials are taking part in an international online exercise simulating a joint search and rescue and environmental response operation following a collision between an expedition cruise ship and an oil tanker off the northern coast of Iceland.

The Arctic Guardian 2021 exercise, which began Monday and runs through Wednesday, brings together representatives of all eight Arctic countries: Canada, Finland, Iceland, Denmark, Norway, Russia, Sweden and the United States.

The Arctic Council is an international forum made up of the eight Arctic countries and the six Arctic Indigenous groups. In 2015, all eight circumpolar nations signed a historic deal committing their coast guards to cooperate and coordinate their work in the treacherous but increasingly accessible Arctic Ocean, creating the ACGF.

The coast guard forum is one of the few remaining areas of cooperation between Russia and the seven other Arctic nations, amid growing tensions between Moscow and the West over Ukraine, Syria and other areas.

“As maritime activity in the Arctic increases, it elevates the risk of serious incidents and the need to plan and prepare for emergency and pollution responses,” said in a statement Jens Peter Holst-Andersen, chair of EPPR.

“It is crucial to test and better understand the challenges of a coordinated response that involves many different players in a safe environment.”

Arctic Guardian was initially planned as a live exercise but was moved online because of the pandemic concerns.

Still, officials say these kinds of exercises will allow Arctic nations to not only test response activities, but also build and strengthen the relationships between diverse players, which could be incredibly important at the time of real emergency.

Officials at Fisheries and Oceans Canada (DFO) and the Canadian Coast Guard said the collaborative exercise provides participants with a means to discuss their communication and coordination processes in the event of a major marine search and rescue and oil spill incident in the Arctic that exceeds a single nation’s ability to respond.

“The Canadian Coast Guard is pleased to be providing our expertise for this exercise in order to help better prepare for a similar incident in the Arctic should one ever occur,” a DFO spokesperson said. 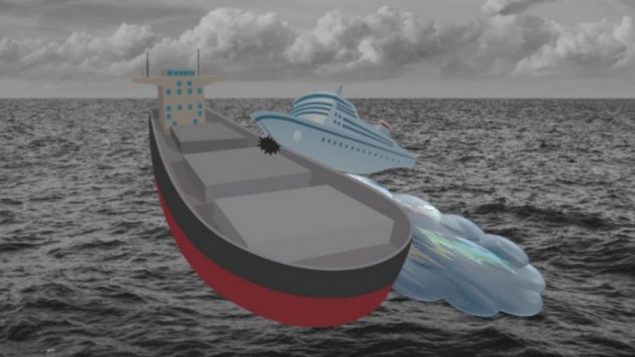 The Arctic Guardian 2021 incident being practiced involves a collision off the northern Icelandic coast between a medium-sized oil tanker and an expedition cruise vessel with 250 passengers on board. (Courtesy Arctic Council)

Exercise participants are practicing a scenario in which a human error causes a collision between an expeditionary cruise ship with 250 people on board and an oil tanker in waters off the northern coast of Iceland filled with spring drifting ice.

“The Arctic and adjacent regions are incredibly challenging,” Larusson said in a statement.

“Therefore, we have to exercise and prepare for major incidents, emphasizing harsh weather conditions, long distances involved and limited infrastructure.”

Russia will assume the two-year rotating chairmanship of the Arctic Council and the coast guard forum in May and will be responsible for hosting the Arctic Guardian exercises over the next two years.